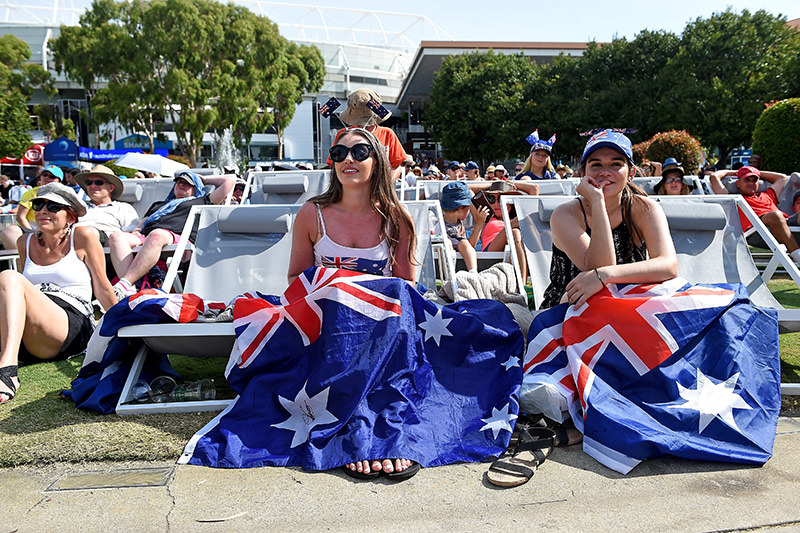 The annual official National Day of Australia marks the anniversary of the British First Fleet's arrival at Port Jackson, New South Wales, in 1788. (EPA photo)
by Anadolu Agency
Jan 26, 2016 12:00 am
While many Australians took advantage of the national holiday Tuesday to flock to beaches, "throw a shrimp on the barbie" or participate in one of a multitude of celebratory events around the country, others were in a less than fun mood.

As many sunbathed, clinked glasses around a "sausage sizzle" or participated in the Great Australian Swim in Sydney Harbour to celebrate Australia Day, hundreds marched solemnly in protest at what they have come to call Invasion Day or Survival Day -- two commemorations that define the gulf between Australia's first people and the rest of the population.

For some, Jan. 26 could be dubbed Australia's Insensitivity Day, because as a growing number of the country acknowledges, the powers-that-be couldn't have chosen a worse date to celebrate the country's national day.

Linda Burney, the NSW deputy opposition leader and the first Aboriginal person to be elected to parliament in the state, told Anadolu Agency on Tuesday that she has always felt "uncomfortable" about Jan. 26 and believes it "has a use-by date" which is fast approaching.

That period is "a microsecond of our whole story," she underlines.

Jan. 26 is divisive as it marks the start of the British colonisation of 1788 (and the subsequent slaughter of the country's indigenous people, the dispossession of their land and the trashing of their culture), whereas in other countries a national day is celebrated on the day of independence or another special event.

New Zealand, for example, celebrates Waitangi Day on Feb. 6, commemorating the signing of the Treaty of Waitangi between the settlers and the local Maori people in 1840.

The argument for change has been no better expressed than in a video by indigenous Australian broadcaster Stan Grant.

On the eve of Australia Day, his raw, powerful speech about "Australian racism", which he delivered in October last year, exploded online and went viral within hours.

It was an impassioned plea for change and it triggered debate around the country regarding the choice of date.

In the speech Grant referred to "the Australian dream" being "rooted in racism" -- Indigenous people die a decade younger than the rest of the population, and even though they make up just 3 percent of Australia's 23 million people, one in four prisoners is Aborigine.

A statement signed by Aboriginal leaders and posted on the Invasion Day Facebook page spells out aboriginal frustration: "To celebrate Australia Day on the 26th January clearly demonstrates the continued lack of human compassion shown to us by the invaders and those they have allowed into this country."

One of those at the forefront of anti-Jan. 26 movement is Dr. Chelsea Bond, a Senior Lecturer at Queensland University of Technology who on Jan. 26 last year spelt out her frustration in academic journal The Conversation in a piece titled: "The day I don't feel Australian? That would be Australia Day."

Talking to Anadolu Agency on Tuesday, she said she feels that discussing indigenous issues makes some non-indigenous people feel guilty because "there's a deep uncomfortability in this nation's consciousness about never having reconciled or dealt with the [colonial] occupation".

Consequently, she questions when a change of date is likely to occur.

"If we want a national day that's inclusive when we can all celebrate who we are as a nation then clearly January 26 is not the day," she says.
"I can't understand the logic behind retaining the current date except to maintain the power that one group holds over another."

In last year's published piece, Bond wrote: "Australia Day celebrations to me feel a bit like what ANZAC Day would be without a dawn service."

ANZAC stands for Australian and New Zealand Army Corps, many of whom fought in the 1915 Battle of Çanakkale in Turkey -- known as Gallipoli in Australia. The ANZAC legend is central to the Australian identity.

NSW deputy opposition leader Burney noted that more and more indigenous people are getting involved in official events on Jan. 26 to -- quiet simply -- "get our story out there".

"I've been involved in the aboriginal movement for 40 years now and 10 years ago there's no way that aboriginal people would have been to participate in Australia Day events. But they are increasingly doing so," she said.

"Many Aboriginal people have taken a decision to participate in and be part of the day so we can put the message out that we want our story respected and heard and that we understand that we can only go forward as one."

- "A sausage sizzle" is a popular Australian charity fundraising and community event, where a barbecued sausage is served on a slice of white bread, often accompanied by mustard, tomato sauce, and sometimes barbecued onions.