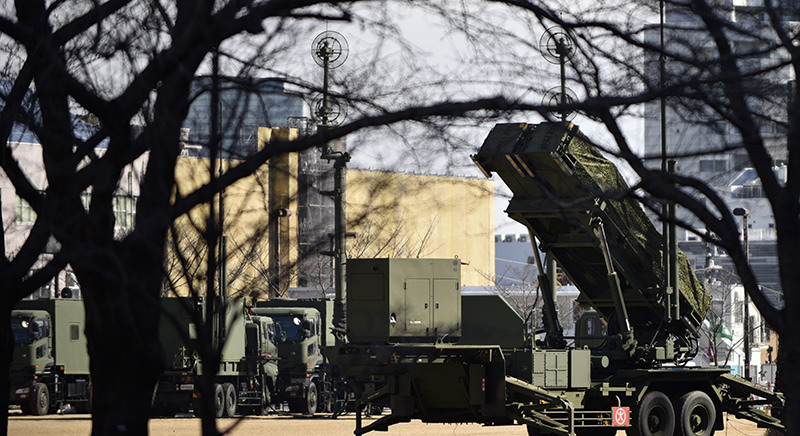 Japan's Ground Self-Defense Force Patriot Advanced Capability-3 (PAC-3) missile interceptor unit is deployed to counter North Korea's possible launch of ballistic missile at the Defense Ministry in Tokyo (EPA Photo)
by Feb 03, 2016 12:00 am
North Korea should abandon its plan to fire a rocket into space, its neighbours South Korea and Japan said Wednesday, after Pyongyang told UN agencies that it would carry out a satellite launch later this month.

The launch would be a "challenge" to the international community, said Cho Tae Yong, deputy chief of the presidential office of national security in South Korea, according to Yonhap News Agency.

"We sternly warn North Korea that it will pay a harsh price" if it goes ahead, he was quoted as saying.

Japan's Defence Minister Gen Nakatani said the rocket was projected to fly near the south-western island of Okinawa and its neighbouring islands.

He had ordered the military to shoot down the North Korean missile if it threatened Japan's territory, using a missile interceptor system.

"Forcibly carrying out a launch would be in clear defiance of UN Security Council resolutions" and "a grave act of provocation toward Japan's security," Prime Minister Shinzo Abe said during a parliament committee session.

The UN said it had been informed of plans to launch an "Earth observation satellite" between February 8 and 25, less than a month after the reclusive regime's controversial nuclear test.

"Right now, we are carefully monitoring developments and are in close touch with the interested parties and international organizations," he said.

The United States said the planned launch would be a provocation and that it is continuing to work with the international community to weigh its actions following a North Korean nuclear test last month.

"The international community would regard a step like that by the North Koreans as just another irresponsible provocation and a clear violation of their international obligations," White House spokesman Josh Earnest said.

North Korea launched a rocket in 2012, claiming it had sent a satellite into space. But the US charged the country with having secretly tested intercontinental ballistic missiles with nuclear capabilities.

North Korea says it exploded a hydrogen bomb on January 6, but Western experts say evidence suggests it was more likely to have been a normal atom bomb. An H-bomb has a higher explosive force than what was observed.