37 dead after bus falls into river in India 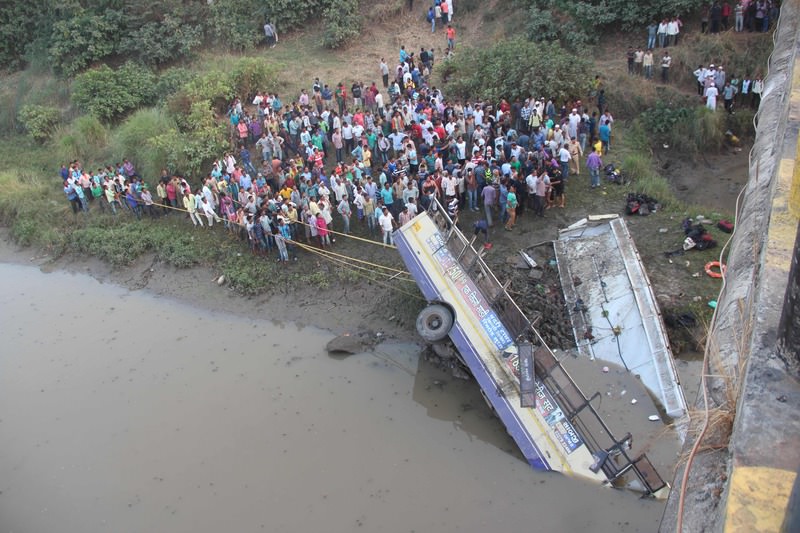 by Feb 05, 2016 12:00 am
A packed passenger bus plunged off a bridge into a river in western India Friday killing at least 37 people, an official said, in one of the deadliest road accidents in recent years.

The incident happened when the driver lost control and veered off the road into Purna river in Navsari district, some 285 kilometres (180 miles) from Ahmedabad, the main city of Gujarat state.

"The death toll has risen to 37. At least 24 others are admitted to hospital for treatment," senior administrative official Remya Mohan in Navsari said.

Television images showed locals and rescuers in the water, using their bare hands to carry people to ambulances in bedsheets and remove parts of the mangled bus wreckage.

The Gujarat government announced 400,000 rupees ($5,900) in compensation for the families of those killed.

Fatal traffic accidents are common in India, which has some of the world's deadliest roads.

In October, 15 members of a wedding party, including three children, were killed when a vehicle they were travelling in collided with a bus in southern India.

In 2013, a speeding bus exploded in a ball of flames after crashing into the central reservation of a southern Indian highway, killing 45 passengers as they slept.

The number of deaths on Indian roads -- more than 231,000 every year, according to a World Health Organization in 2013 -- is disproportionately high.

India owns only one percent of global vehicles but accounts for 15 percent of traffic deaths around the world, according to the World Bank.

Campaigners say commercial drivers are largely unregulated, meaning many work long hours overnight which raises the danger of falling asleep at the wheel.