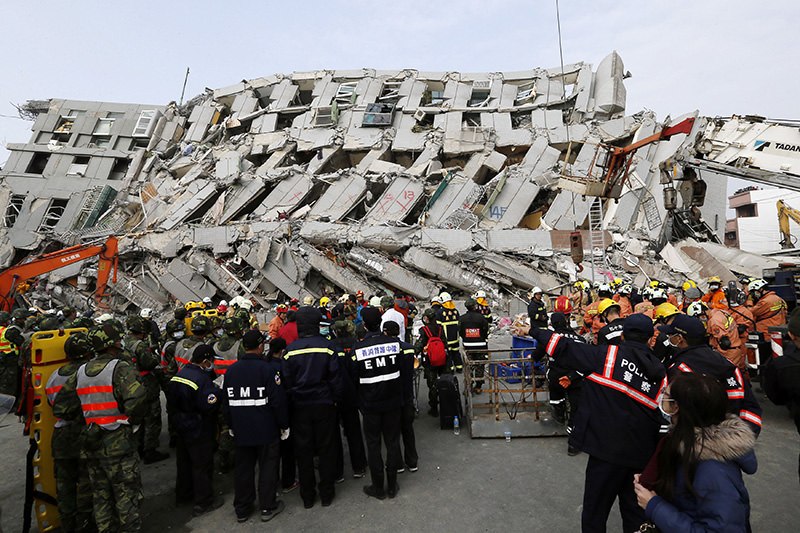 As of Sunday noon, the death toll in the southern city of Tainan climbed to 23 and an estimated 500 people were injured, according to the city government. Nearly 100 victims were still being treated in hospitals and about 72 people remained missing, it reported.

Most of the missing people were in the 17-storey apartment building that collapsed in the city's Yungkang district.

Authorities suspect shoddy construction could be the reason the building did not hold up in the quake that struck 3:57 am Saturday (1957 GMT Friday).

The search for survivors lasted throughout the night. A 14-year-old girl was rescued after being trapped under debris for 27 hours, the Apple Daily reported.

"It hurts incredibly! Come help me quickly! I'm dying," the girl, who was stuck in debris, said to rescuers in video footage shown on SET TV.

Rescuers found signs of life in the rubble Sunday morning and successfully rescued six people from the collapsed building, CNA reported. A 32-year-old man was able to crawl out, and asked the rescuers to reach his girlfriend and family trapped inside.

Lai arrived at the site with a Japanese team of volunteers, local media reported.

Sunday is the Lunar New Year's eve, and Chang expressed his condolences to the families of victims. In Taiwan, the biggest event of the day is the reunion dinner with family and relatives.

The collapsed apartment building was home to about 250 people in 96 households, according to the Central Emergency Operation Centre. But headcounts of survivors showed that more than 300 people were inside at the time of the quake.

The total population of the building may have swelled ahead of the holiday, when families typically host guests or relatives from other parts of Taiwan.

High-speed rail service that had been suspended in the southern region since the earthquake hit was scheduled to return to normal Sunday.

American pop star Madonna offered condolences to those affected by the deadly quake. She was in the capital Taipei for two concerts when it occurred.

Madonna called the experience was "scary."