Afghanistan peace meeting ends with call for talks with Taliban 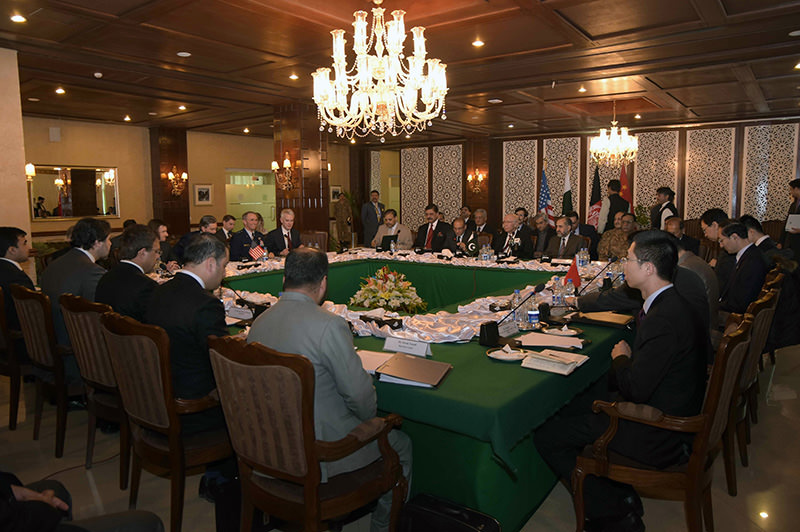 Pakistan's National Security Advisor Sartaj Aziz (Center) chairs the third round of four-way peace talks with Afghanistan, US and Chinese delegates in Islamabad (AFP/APP Photo)
by Associated Press Feb 06, 2016 12:00 am
Four-nation talks aimed at ending Afghanistan's 15-year war concluded Saturday with a call for direct negotiations between the government and the Taliban by the end of February, but recent battlefield advances by the insurgents could make it hard to coax them to the table.

A one-page statement released at the end of the meeting, which was attended by representatives of Pakistan, Afghanistan, China and the United States, said a roadmap for peace had been agreed upon. However it offered no details on what incentives the government might offer the Taliban.

The statement urged the Taliban, who were not present at the meeting, to join the peace process. All four countries agreed to hold a fourth meeting in Kabul on Feb. 23.

The last direct talks between Kabul and the Taliban broke down after just one round last year following the announcement of the death of Taliban leader Mullah Mohammad Omar.

A diplomat attending the four-nation talks, which were held in Pakistan, said one of the biggest obstacles is identifying which Taliban factions are sincere about making peace and which are "irreconcilable" -- either too radical to compromise or too tainted by past atrocities.

The diplomat also said the four nations are struggling to agree on confidence-building measures and other incentives to bring the insurgents back to the negotiating table. The diplomat asked that neither his name nor nationality be used because he was not authorized to talk to the media.

Sartaj Aziz, Pakistan's special adviser on foreign affairs, said efforts "have to be aimed at persuading (the) maximum number of Taliban groups to join the peace talks."

"This will contribute to imparting a momentum to the process offering the incentive of political mainstreaming to the insurgent groups, and gradually shrink the space for the irreconcilables."

But Imtiaz Gul, executive director of the Center for Research and Security Studies in Pakistan, said there are "practically no incentives" to offer Taliban field commanders, many of whom believe they are winning the war after a series of advances over the past year.

Afghan forces have struggled to contain the Taliban since the U.S. and NATO formally concluded their combat mission and switched to a support and training role at the end of 2014.

Pakistan, which Kabul has accused of granting Taliban leaders safe haven on its territory, is seen as key to getting the insurgents to negotiate. Pakistani officials say their influence over the Taliban is overstated.

The head of Pakistan's intelligence agency, the InterServices Intelligence or ISI, met with his Afghan counterpart on Thursday, in a sign of thawing ties between the two countries, which have long accused each other of turning a blind eye to militants operating along their porous border.