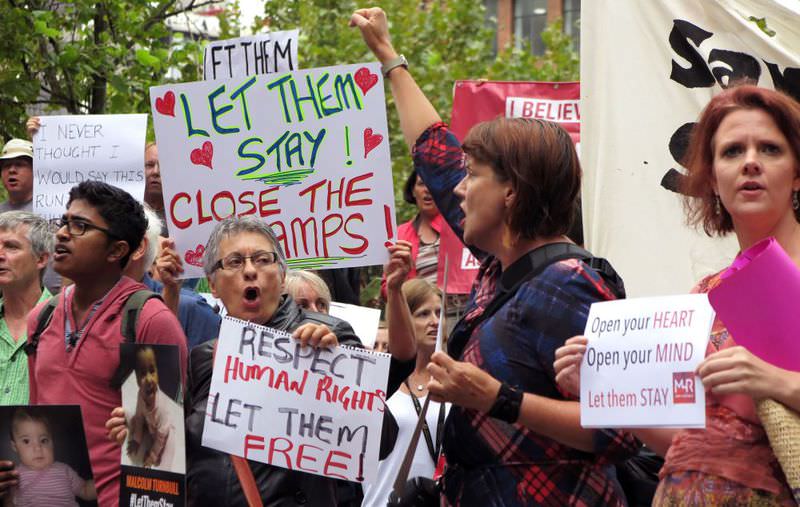 People hold up placards at a protest outside an immigration office in Sydney on Feb. 4. (AFP Photo)
by Compiled from Wire Services Feb 06, 2016 12:00 am

A leaked document urges tougher checks on Syrian refugees in Australia and outlines measures to monitor them even after they gain citizenship to keep the country clear of ‘extremists.' PM Malcolm Turnbull denied having seen the document

Australia is considering subjecting thousands of refugees from Syria to tougher character and security checks than European counterparts, to minimize the risk of "extremist infiltration," according to a leaked policy document.

The draft document singles out refugees from Syria as potentially holding beliefs or associations which may lead them to engage in violent activities, and outlines measures to monitor them even after they gain Australian citizenship.

Australia's prime minister claimed on Friday that neither he nor his immigration minister had seen a leaked government document proposing changes to the country's humanitarian resettlement policy, including additional screening of Syrian refugees. Prime Minister Malcolm Turnbull told reporters Friday that he could not comment on the document's status, as he had not read it.

"As far as future policies are concerned, I can assure you that in terms of people's rights, that there is only one class of citizenship in Australia," the Australian Associated Press quoted him as saying in Canberra. He stressed that all citizens possessed the same rights and obligations, including obeying the law – "so that applies whether you were born here or whether you took out your citizenship last week."

While Immigration Minister Peter Dutton also claimed he had not seen the document, he insisted he would not apologize over the issue of screening refugees. "We are going to be tough in terms of the screening processes because we want to afford refuge to those people who are refugees," Australia's public broadcaster Australian Broadcasting Corporation (ABC) quoted him as saying. "This is a very serious time for our country, for Western democracies... people will pretend to be refugees when they're not," he added.

Australia is part of the United States-led bombing campaign against DAESH in Iraq and Syria and is on heightened alert for attacks by home-grown radicals. Australia's tough asylum seeker policy, which includes mandatory detention for people arriving by boat, is a hot-button political issue. ABC first reported on the leaked document prepared for the seven-member National Security Committee. Reuters has obtained a copy.

The seven-page document lays out recommendations to be put forward by Immigration Minister Peter Dutton this year. "To mitigate risks and build public confidence, I (Minister for Immigration and Border Protection) will be bringing forward a package of reforms to simplify Australia's visa framework and create stronger controls over access to permanent residency and citizenship," it says. "This new framework will introduce additional decision points along the immigration continuum including ... enhanced access, use and protection of sensitive information to strengthen intelligence-led, risk based decision making ... from pre-visa stage to post-citizenship conferral."

A spokeswoman for Dutton dismissed the significance of the documentbut declined to comment as to whether the minister supported its contents.

"Government departments produce draft documents for consideration all the time. This is a draft document which has not been seen by the Minister or his staff – nothing more," she said.

Australia last year agreed to accept 12,000 refugees fleeing the conflict in Syria, as hundreds of thousands of asylum seekers flooded into Europe amidst the worsening conflict. "The Immigration Department proposals are self-defeating as they risk creating greater marginalization and disaffection among new arrivals," Paul Power, CEO of the Refugee Council of Australia, said in a statement.

The document also singles out Australia's Lebanese Sunni Muslim population as an example of the "potential community safety and national security risks associated with unsuccessful immigration."

Only about half a million people out of Australia's 23.5 million are Muslims. At least half live in Sydney's western suburbs, which were transformed in the mid-1970s from white working-class enclaves into majority-Muslim outposts by a surge of immigration from Lebanon. Samier Dandan, president of the Lebanese Muslim Association, one of the country's most influential Muslim organizations, told Reuters that the approach outlined in the document risked backfiring. "It's probably going to feed the frenzy and provide a supply line for the recruiters," he said.

Australia's tough asylum seeker policy of mandatory detention has been criticized internationally, but is likely to figure highly in national elections due to be held later this year. A High Court ruling on Wednesday which paved the way for the deportation of over 250 asylum seekers to an offshore immigration camp in Nauru sparked protests and drew sharp criticism from The United Nations and church leaders.
RELATED TOPICS