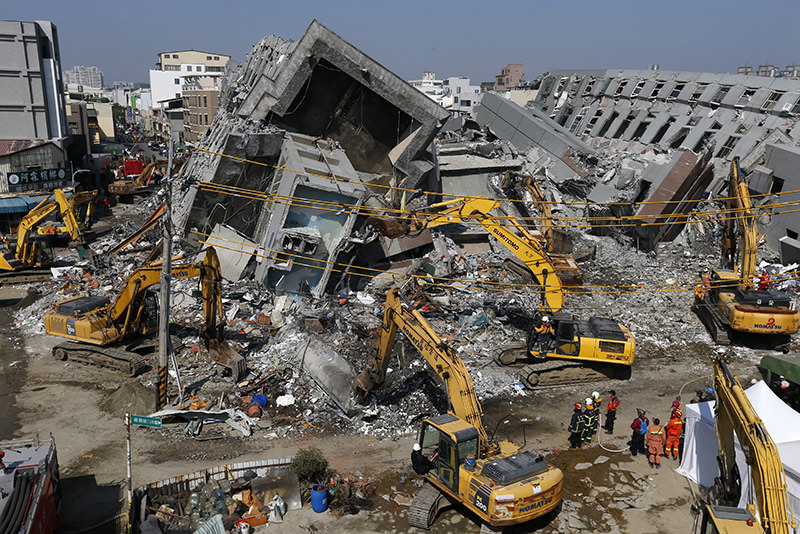 Rescuers continued to search for 109 people thought to be trapped in a high-rise that collapsed when an earthquake hit southern Taiwan more than three days ago, as the death toll rose to 41 Tuesday afternoon.

The fire department of Tainan, the hardest-hit city, said a 15-year-old boy was among the latest victims recovered from the 16-story building in Yongkang District, the official Central News Agency reported.

Of the fatalities, 39 were found in the Weiguan Jinlong residential building and the other two in nearby Gueiren District.

According to the department, 406 of the 497 people who sustained injuries in Tainan have been released from hospital as of noon Tuesday.

Prosecutors in the city requested court permission Tuesday to detain three former executives of the real estate development company that constructed the building but is no longer in operation, including the Weiguan company's former chairman and two other former executives.

The agency reported that they are wanted on charges of professional negligence resulting in death.

On Monday, rescuers had managed to pull of survivors who had been trapped for more than two days since the magnitude 6.4 earthquake.

Among them were an eight-year-old girl, a woman found shielded under the body of her dead husband, and a man who doctors said would have to have his lower left leg amputated.

The CNA reported that as rescuer pulled the girl from the rubble, said told them, "uncle, I am very thirsty".

Mayor Lai Ching-te of Tainan, where around nine buildings collapsed, has said that the number of fatalities could increase to more than 100, mostly consisting of Weiguan Jinlong residents.

Lai had earlier said that most of those still missing were trapped in lower stories, hindering rescue teams' ability to access them.

Residents in Taiwan's south and central regions had recalled experiencing tremors resembling those felt in a magnitude 7.3 earthquake in 1999 that killed more than 2,400 people.

Interior Minister Chen Wei-zen told a press conference Saturday that authorities would conduct an investigation into the Weiguan Jinlong building, whose construction had been completed in November 1994.