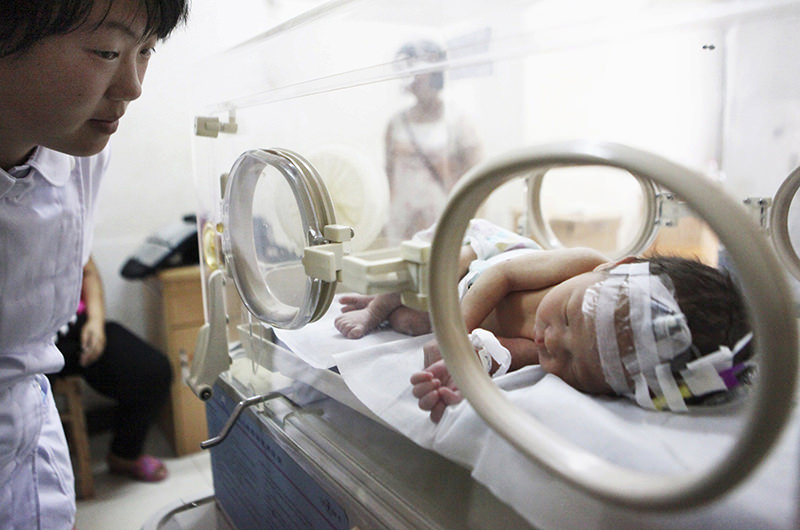 A nurse (L) looks at an abandoned newborn baby resting in an incubator after he was rescued from a sewage pipe at a hospital in Jinhua, Zhejiang province May 28, 2013 (Reuters Photo)
by Feb 09, 2016 12:00 am
A Chinese baby boy who was declared dead and spent the night in a morgue showed signs of life just as he was about to be cremated, local TV reported.

Workers at the crematorium in Pan'an in the eastern province of Zhejiang were preparing to cremate the baby on Friday when he suddenly starting moaning, provincial television reported.

The boy had been declared dead the day before and had spent 15 hours in the morgue at a temperature of about -12 degrees Celsius (10.4 F).

After finding the child alive, the crematorium notified his father and the baby was taken to a hospital intensive care unit.

"It's the first time I've seen this. It's a true miracle," said a doctor at the Pan'an hospital where the infant was born prematurely in January.

The child spent 23 days in an incubator and was then taken home by his father, who wanted him there for the start of the Lunar New Year which began Monday.

But the baby's condition worsened a few days after returning home. He was declared dead on February 4 after a doctor decided his heart had stopped beating.

Before the baby was sent to the morgue, his father had wrapped him in two layers of clothing and a thick bag which may have saved his life.

However, doctors are cautious about his chances of recovery.
Last Update: Feb 09, 2016 2:34 pm
RELATED TOPICS