Gas tanker collides with car in Pakistan, kills 10 in fireball, including six children 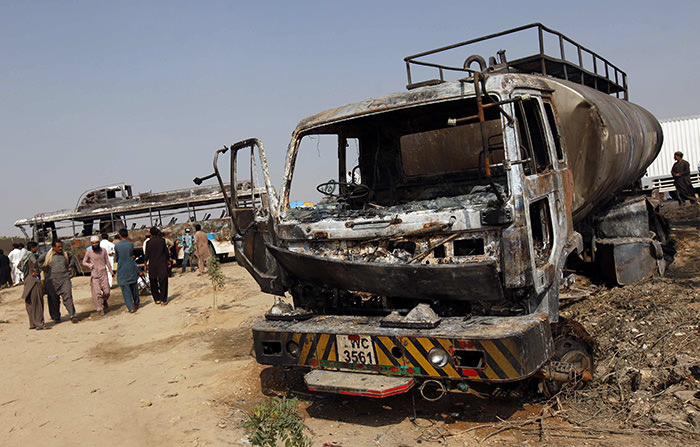 People look at the wreckage of a bus and tanker after they collided early Sunday, on the outskirts of Karachi January 11, 2015 (Reuters Photo)
by Feb 10, 2016 12:00 am
Six schoolchildren were among at least 10 people killed when a fireball erupted as a tanker carrying liquefied petroleum gas (LPG) collided with a car in eastern Pakistan on Wednesday, engulfing surrounding vehicles, officials said.

The accident, which also injured at least 17, happened on a busy highway in the district of Sheikhupura in Pakistan's most populous Punjab province.

"According to initial information, a car was making a U-turn and struck the tanker," senior local police official Latif Gujjar told AFP.

He added that two cars, two rickshaws that were carrying children to school, and two motorbikes had been destroyed and the bodies of the dead were badly charred.

"The loss of life was mainly caused by the tanker fire," he added.

Heavy fog that descends upon central and northern Pakistan in winter is a leading cause of road accidents.

Pakistan also has an appalling record of fatal traffic accidents due to poor roads, badly maintained vehicles and reckless driving.