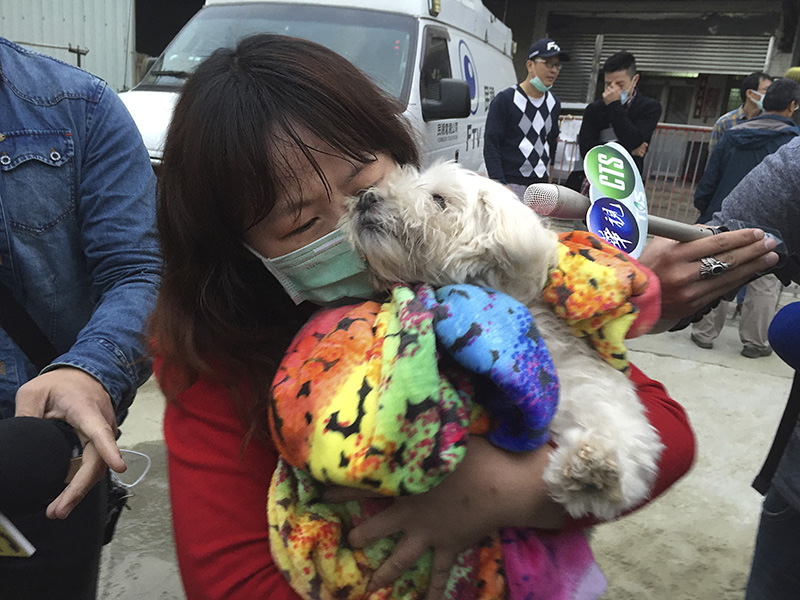 A rescued pet Maltese dog named Le Le, 7 years old, held by a relative of the owner after being rescued from collapsed building complex in Taiwan, Feb. 10, 2016 (AP)
by Feb 11, 2016 12:00 am
A poodle was rescued early Thursday after being trapped for days in a Taiwan building that collapsed in an earthquake at the weekend, a news report said.

Rescuers said 53 people were confirmed dead in the ruins of the 17-storey Weighuan Jinlong apartment building in the southern city of Tainan that collapsed in Saturday's 6.4-magnitude earthquake.

The figure brought the quake's death toll to 55, with 83 people still missing, the Central Emergency Operation Centre was quoted as saying.

The last people found alive after the collapse were pulled from the rubble on Monday. The search and rescue effort is ongoing.

The red poodle rescued Thursday was shivering but otherwise apparently uninjured, the report said. Another dog, a white Maltese, was rescued Wednesday, it said.

Three former executives of the company that built the Weighuan residential complex were arrested late Tuesday, amid suspicions that its construction did not meet safety standards.
Last Update: Feb 11, 2016 12:18 pm
RELATED TOPICS