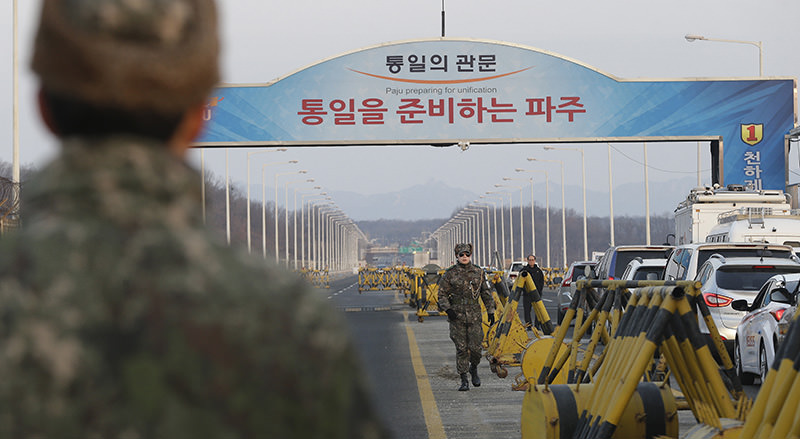 A South Korean army soldier walks on Unification Bridge, which leads to the demilitarized zone, near the border village of Panmunjom in Paju, South Korea, Thursday, Feb. 11, 2016 (AP Photo)
by Associated Press
Feb 11, 2016 12:00 am
Under the gaze of armed soldiers, large white trucks streamed across the world's most armed border Thursday as South Korean workers on Thursday began shutting down a jointly run industrial park in North Korea. The South's suspension will end, at least temporarily, the Koreas' last major cooperation project as punishment over Pyongyang's recent rocket launch.

It was unclear how long the shutdown at the industrial complex in the border city of Kaesong would last, or even how long it would take South Korean companies to close down. Pyongyang has yet to comment, but Seoul said that North Korean workers did not report to work at Kaesong on Thursday.

Along the South Korean side of the border, trucks lined up Thursday morning before crossing into North Korea, presumably to bring back products and gear from the factories. Soldiers stood guard near customs offices and military vehicles escorted cars and vans to the South Korean side.

The shutdown is one of Seoul's strongest available punitive measures, but it is unclear how seriously the impoverished North would be hurt. Seoul said it wants to stop Pyongyang from using hard currency from the park to develop its nuclear and missile programs.

The closing is meant to punish North Korea for its Sunday launch of a rocket that the world sees as a banned test of ballistic missile technology.

Yoon Sang-eun, 62, a South Korean driver for a firm at the factory park, said that if Kaesong "stops operating, companies like us almost have to close off business. It is difficult."

The South's Unification Ministry, which is responsible for ties with the North, said about 130 South Koreans planned to enter Kaesong on Thursday to begin shutdown work, and that nearly 70 South Koreans who had been staying there would be leaving.

North Korea, in a fit of anger over U.S.-South Korean military drills, pulled its workers from Kaesong for about five months in 2013. But, generally, the complex has long been seen as above the constant squabbling and occasional bloodshed between the rival Koreas, one of the last bright spots in a relationship more often marked by threats of war.

The question among some is, Why now?

While Park has yet to explain her reasoning on the timing, she has previously shown a willingness to take quick action when provoked by the North. When the North conducted its fourth nuclear test last month, for instance, she resumed anti-Pyongyang propaganda from loudspeakers along the border, despite what Seoul says was an exchange of cross-border artillery fire the last time she used the speakers.

"It appears that such funds have not been used to pave the way to peace as the international community had hoped, but rather to upgrade its nuclear weapons and long-range missiles," he said at the televised briefing.

The Unification Ministry said in a statement that the government had "decided to completely shut down" the park. It notified North Korean authorities of the decision and asked them to help ensure the safe return of South Korean citizens from Kaesong.

Combining South Korean initiative, capital and technology with the North's cheap labor, the industrial park has been seen as a test case for reunification between the Koreas. Last year, 124 South Korean companies hired 54,000 North Korean workers to produce socks, wristwatches and other goods worth about $500 million.

The United States supported the move by its close ally, and said it was considering its own, unspecified "unilateral measures" to punish Pyongyang for its recent nuclear test and rocket launch, even as the U.N. Security Council deliberates imposing more multilateral sanctions.

South Korea's government will provide financial compensation to companies that operate at the park, the Finance Ministry said.

South Korean businesses with factories at the park reacted with a mixture of disappointment and anger. In a statement, the association of South Korean companies in Kaesong denounced the government's decision as "entirely incomprehensible and unjust."

Kim Ki-hang, 53, a senior manager with a South Korean company operating at Kaesong, says the government did not give the companies enough time. "How do we take and ship the products out without enough time?" he asked.

The park also allowed people from both Koreas to interact with each other and glimpse into lives on the other side of the border. Some South Korean snacks have become popular among North Korean workers.