S. Korea says North responsible for what happens next 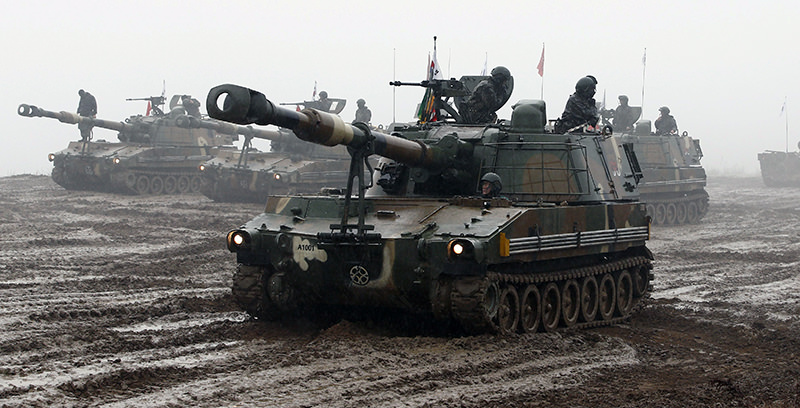 South Korean soldiers and K-55 self-propelled howitzers from the Army's 20th division, participate at field training exercise against a possible attack from North Korea (EPA Photo)
by Anadolu Agency Feb 12, 2016 12:00 am
The future of Seoul-Pyongyang ties looked increasingly bleak Friday, as South Korean officials were left to guess what will become of a shared industrial facility situated just inside North Korea -- with 124 businesses from the South facing heavy losses after being abruptly kicked out of the reclusive state.

Seoul had announced Wednesday plans for a more gradual withdrawal from the Kaesong Industrial Complex, which was a legacy of the first ever inter-Korean summit held in 2000.

The pull-out was designed to cut off any possible financial support for North Korea's nuclear weapon ambitions following its major breaches of United Nations resolutions this year -- first a nuclear test in January and then a long-range rocket launch last Sunday.

But on Thursday afternoon the North suddenly ordered the immediate departure of the remaining hundreds of South Korean citizens at the complex.

An official statement from Pyongyang referred to the "end to the last lifeline of South and North Korea."

The North also cautioned that its more prosperous neighbor would experience "disastrous and painful consequences," but Seoul had its own warning to share Friday.

"We expressed very grave regret over the North's move. North Korea should take all responsibility for what will happen from now on," South Korean Unification Minister Hong Yong-pyo told reporters.

He called for the protection of Kaesong Industrial Complex assets belonging to the South's firms, although Pyongyang has already indicated that it will ignore the request.

Meanwhile, South Korea's Defense Ministry said that "the military is keeping itself ready for every possibility".

After North Korea's announcement a day earlier that Kaesong would become a military zone, a South Korean ministry spokesperson admitted that the North may well deploy troops to the site given its position near the border.

An association of the South's Kaesong Industrial Complex businesses released a statement asking for the restoration of the factory park, where they employed nearly 55,000 North Koreans, as well as compensation.

But that seems an unlikely outcome with South Korea and the United States planning their biggest ever military drills on the peninsula this year -- a move that is expected to upset Pyongyang further.