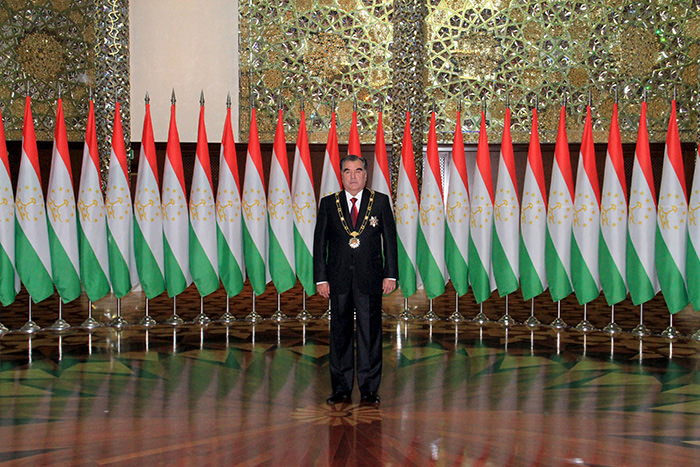 President Emomali Rokhmon (Reuters Photo)
by Feb 16, 2016 12:00 am
Tajikistan has launched a contest for the best essays by schoolchildren in praise of the "heroic" rule of President Emomali Rakhmon, as a personality cult builds around the Central Asian strongman.

The government's youth affairs committee said the contest aimed to teach children about the "heroic life and deeds of the Leader of the Nation" -- the president's official title.

The competition, launched Monday, calls for school children to write essays on the topic: "Young People: Followers of the Leader of the Nation."

It also awards prizes for the "best article on the Leader of the Nation" by university students or young academics.

The president -- who likes to be addressed as "your excellency" -- has overseen a blossoming culture of public glorification of his rule, echoing the personality cults of other Central Asian authoritarian leaders.

More than 30 poets recently published an anthology of verses dedicated to his reign and an MP last year compared him to "the sun" and a "star of happiness" in a pro-government newspaper.

In December, a lawmaker hailed him as the "saviour of the people" as parliament awarded him the title of "Leader of the Nation" that gives him and his family lifelong immunity from criminal prosecution.

Tajikistan recently announced plans for a May 22 referendum, seen as a formality, on whether to allow Rakhmon to stand as president for an unlimited number of terms.

But the state propaganda surrounding the Tajik president still has some way to go before it reaches the levels seen in Turkmenistan, another ex-communist state in the region.