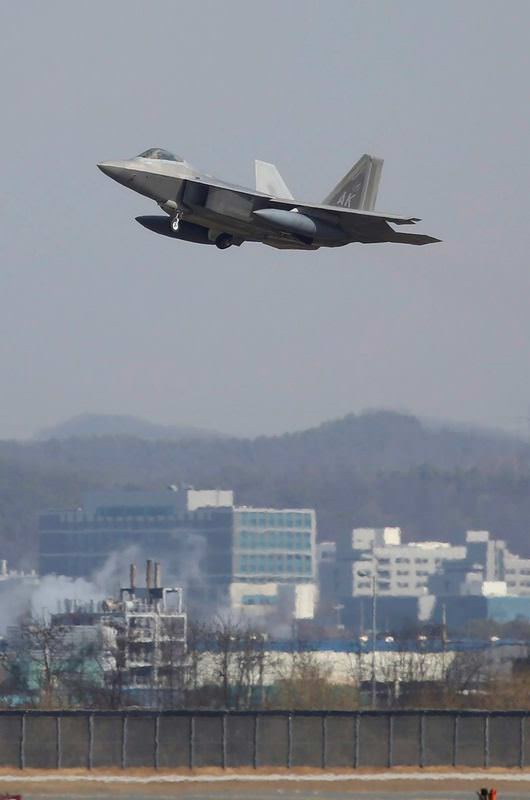 One of the four US Air Force F-22 Raptors, deployed by the US military, flies over Osan Air Base, south of Seoul, South Korea.
by Compiled from Wire Services Feb 18, 2016 12:00 am

A U.S. official confirmed a report from Fox News that China has deployed an advanced surface-to-air missile system to one of the contested islands in the South China Sea. Amid the escalated tensions the U.S. flew over South Korea as a show of force against North Korea

The Chinese military has deployed an advanced surface-to-air missile system to one of its contested islands in the South China Sea, Fox News reported on Tuesday, citing civilian satellite imagery. The images, from ImageSat International, show two batteries of eight surface-to-air missile launchers as well as a radar system on Woody Island, part of the Paracel Island chain in the South China Sea, according to Fox News. Woody Island is also claimed by Taiwan and Vietnam. 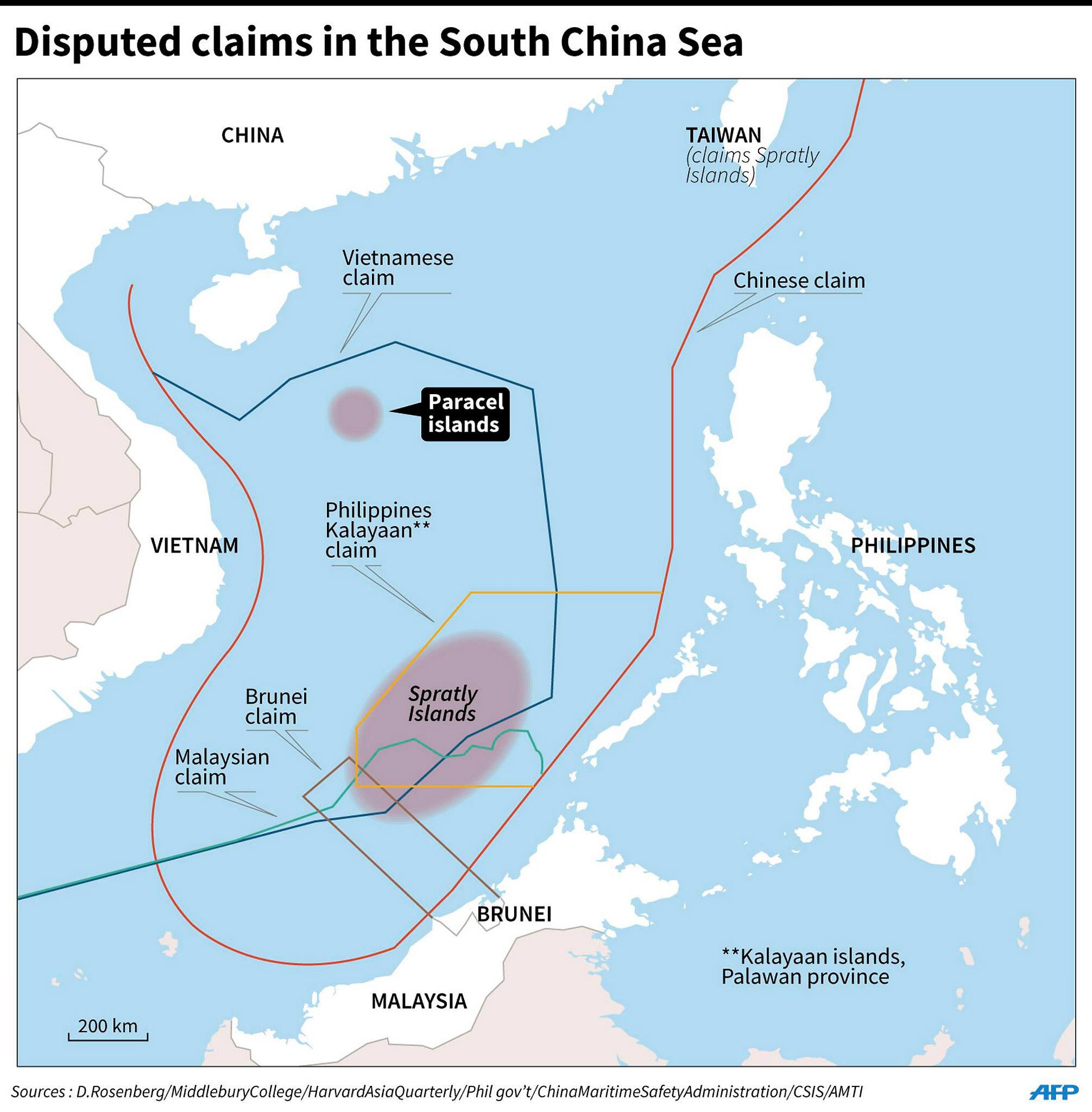 Bill Urban, a Pentagon spokesman, said: "While I cannot comment on matters related to intelligence, we do watch these matters very closely." The report comes as U.S. President Barack Obama and leaders of the Association of Southeast Asian Nations concluded a summit in California. At a news conference following the summit, Obama said he and the Southeast Asian leaders discussed the need to ease tensions in the South China Sea, and they agreed that any territorial disputes there should be resolved peacefully and through legal means. A U.S. Navy destroyer sailed within 12 nautical miles of Triton Island in the Paracel chain last month in a move the Pentagon said was aimed at countering efforts by China, Vietnam and Taiwan to limit freedom of navigation. China condemned the U.S. action as provocative. The missiles arrived at Woody Island over the past week, Fox News said. According to the images, a beach on the island was empty on Feb. 3, but the missiles were visible by Feb. 14, it reported. A U.S. official confirmed the accuracy of the photos, Fox News said. The official said the imagery viewed appears to show the HQ-9 air defense system, which has a range of 125 miles (200 km) and would pose a threat to any airplanes, civilian or military, flying close by, according to Fox News. Over the weekend, The Diplomat magazine reported that China was building a helicopter base at Duncan Island in the Paracel chain. A State Department spokeswoman responded to the Diplomat report by calling on all claimants to the islands to halt construction and militarization of outposts.

Amid the escalated tensions, four U.S. F-22 stealth fighters flew low over South Korea on Wednesday in a clear show of force against North Korea, a day after South Korea's president warned of the North's collapse amid a festering standoff over its nuclear and missile ambitions. The high-tech planes capable of sneaking past radar undetected were seen by an Associated Press photographer before they landed at Osan Air Base near Seoul. They were escorted by other U.S. and South Korean fighter jets. Pyongyang will likely view the arrival of the planes flown from a U.S. base in Japan as a threat as they are an apparent display of U.S. airpower aimed at showing what the United States can do to defend its ally South Korea from potential aggression from North Korea. "The F-22 'Raptor' is the most capable air superiority fighter in the world, and it represents one of many capabilities available for the defense of this great nation," Lt. Gen. Terrence J. O'Shaughnessy, deputy commander of the U.S. military command in South Korea, said in a statement. "The U.S. maintains an ironclad commitment" to the defense of South Korea, he said. The U.S. military would not say how long the F-22s will be deployed in South Korea.

The United States often sends powerful warplanes to South Korea in times of tension with North Korea. Last month it sent a nuclear-capable B-52 bomber to South Korea after North Korea defiantly conducted its fourth nuclear test. The international standoff over North Korea deepened earlier this month when Pyongyang ignored repeated warnings by regional powers and fired a long-range rocket carrying what it calls an Earth observation satellite. Washington, Seoul and others consider the launch a prohibited test of missile technology. Foreign analysts say the North's rocket launch and nuclear test put the country further along it its quest for a nuclear-armed missile that could reach the U.S. mainland.

South Korea's president on Tuesday warned North Korea faces collapse if it doesn't abandon its nuclear bomb program, an unusually strong broadside that is certain to infuriate Pyongyang. In a speech at parliament, President Park Geun-hye said South Korea will take unspecified "stronger and more effective" measures to make North Korea realize its nuclear ambitions will result only in accelerating its "regime collapse." Park made the speech while defending her government's decision to shut down a jointly run factory park in North Korea in response to the North's rocket launch. Pyongyang retaliated by expelling all the South Koreans there, put its military in charge of the area and cut off key communication hotlines between the Koreas. It is unusual for a top South Korean official to publicly touch on such a government collapse because of worries about how sensitive North Korea is to talk of its authoritarian government losing power. Pyongyang has long accused Washington and Seoul agitating for its collapse. After the rocket launch, Seoul announced that talks would begin with Washington on deploying a sophisticated U.S. missile defense system in South Korea and that the allies' annual military drills in the spring will be the biggest ever. The deployment of the Terminal High-Altitude Area Defense, or THAAD, is opposed by North Korea, China and Russia. Opponents say the system could help U.S. radar spot missiles in other countries. Pyongyang has also called regular U.S.-South Korea military exercises a rehearsal for a northward invasion. The allies say their drills are defensive in nature.
RELATED TOPICS