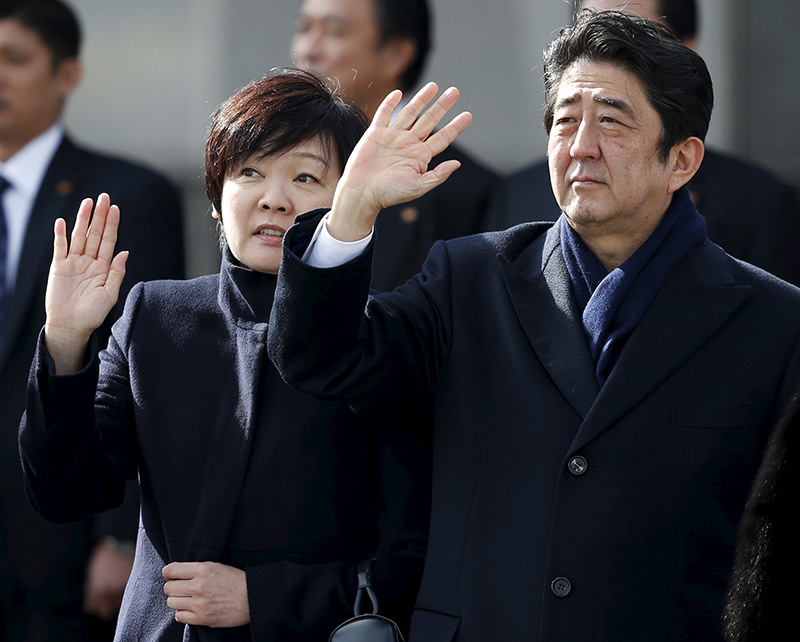 Japanese PM Shinzo Abe (R), his wife Akie wave as they see Emperor Akihito and Empress Michiko off at Tokyo's Haneda Airport, Jan 26, 2016 (Reuters)
by Feb 24, 2016 12:00 am
Japan said Wednesday Prime Minister Shinzo Abe would travel to Russia for talks with President Vladimir Putin despite a reported request from the White House that Abe cancel his visit.

"Prime Minister Abe is planning an unofficial visit to Russia at an appropriate time before Putin visits Japan," Chief Cabinet Secretary Yoshihide Suga told a news conference, referring to the Russian president's expected trip to the country this year.

US President Barack Obama urged Abe to cancel his scheduled trip to Russia in a telephone conversation on February 9, as the United States seeks to isolate Moscow over its actions in Ukraine and Syria, Kyodo News agency reported, citing unnamed diplomatic sources.

In the press conference, Suga declined to comment on the Kyodo report. Japan's Foreign Ministry has not revealed what Abe and Obama discussed regarding the trip to Russia.

"Regarding Japan's diplomacy with Russia, we will closely cooperate and communicate with the United States," Suga said. "Japan will appropriately respond to challenges facing the international community such as the situation in Ukraine through cooperation with the Group of Seven countries."

The Japanese premier is keen to settle a decades-old territorial dispute over islands off Hokkaido that are controlled by Russia but claimed by Japan.

Abe will push through with his trip to Russia in May whatever the United States says, a source was quoted as saying in the earlier Kyodo report.
Last Update: Feb 24, 2016 9:50 am
RELATED TOPICS