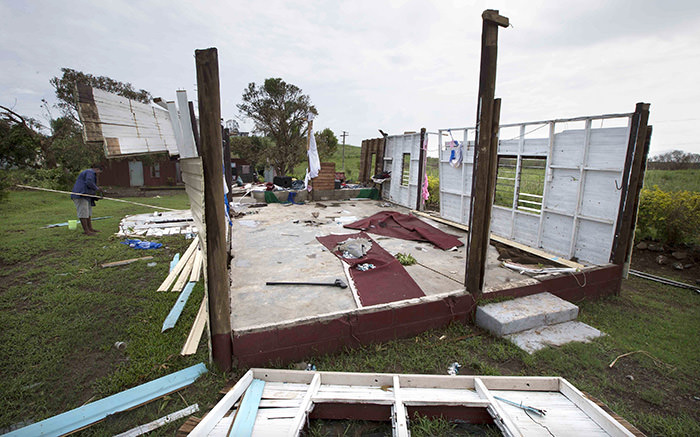 A man surveys a destroyed building in Tavua, Fiji, after cyclone Winston ripped through the island nation on Feb. 24, 2016 (AP Photo)
by Feb 25, 2016 12:00 am
Tens of thousands of Fijians remain homeless and living in evacuation shelters in the aftermath of a devastating cyclone at the weekend, officials said on Thursday, as aid began trickling in to the outer reaches of the South Pacific archipelago.

The death toll from Cyclone Winston, the worst storm ever recorded in the southern hemisphere, remained at 42 but officials at Fiji's National Disaster Management Office fear that figure will rise.

Officials from the disaster agency estimate that 35,000 people are sheltering in evacuation centres, some of which are damaged and running short of food and other supplies. Some 900,000 people live in the archipelago of more than 300 islands

International aid agencies said supplies were being delivered but the scale of the damage to infrastructure, particularly jetties and communications equipment, was making it hard to reach remote communities where help was most needed.

CARE Australia spokesman Dylan Quinnell said there had still been no contact with some remote communities, including one at Yasawa on the northwest coast of Fiji's largest island, Viti Levu, since the cyclone made landfall on Saturday. Others had been reached using radios dropped by the New Zealand air force.

Alice Clements, a UNICEF aid worker, told Reuters by phone from Nadi, Fiji's main tourism hub, that some communities had been totally destroyed but that rebuilding had already begun.

"People are going out during the day to recover what they can, it's not like they're sitting in the shelters helpless, they are salvaging what they can and dusting themselves off," Clements said.

"Volunteers on the ground are saying the destruction is like nothing which they have ever seen before," Sami said.

"Houses have collapsed, communications are still down, power transmission is down, wharves are still not accessible and roads and highways have been damaged," he said.

Joseph Hing, another UNICEF worker, landed on the worst-hit island of Koro on Tuesday and said it "looked like someone took a torch and just burnt from one side to the other".

"As we sailed closer, we started to smell the dead carcasses of livestock that were floating past the ships. When we smelt those, we knew that this disaster was really, really bad," he said in a statement.

Aid workers have warned of potential outbreaks of the Zika and Dengue viruses, both carried by mosquitoes that could breed in the stagnant water left by the storm.