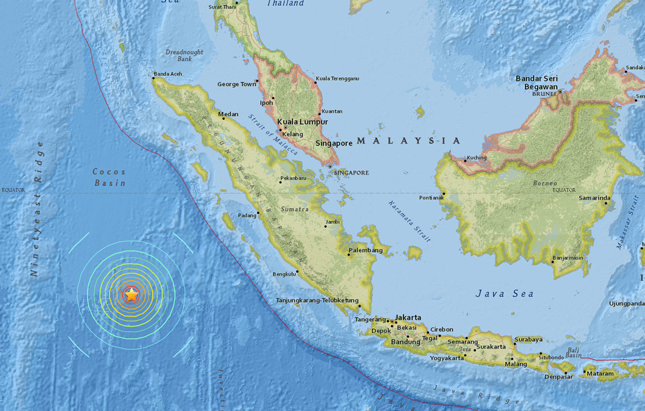 A screenshot of an interactive map provided on the website of the US Geological Survey (USGS) on 02 March 2016 shows the location of an earthquake in a depth of about 10 kilometers southwest of Sumatra, Indonesia | EPA
by Daily Sabah with Reuters Mar 02, 2016 12:00 am

A powerful and shallow earthquake of magnitude 7.9 struck off the west coast of the Indonesian island of Sumatra on Wednesday, the U.S. Geological Survey said.

There were no immediate reports of damage or casualties but the shallower a quake, the more likely it is to cause damage. USGS originally put the magnitude at 8.2, and then 8.1, before lowering it to 7.9.

Indonesia, badly hit by the Indian Ocean tsunami in 2004, straddles the so-called "Pacific Ring of Fire", a highly seismically active zone where different plates on the earth's crust meet and create a large number of earthquakes and volcanoes.