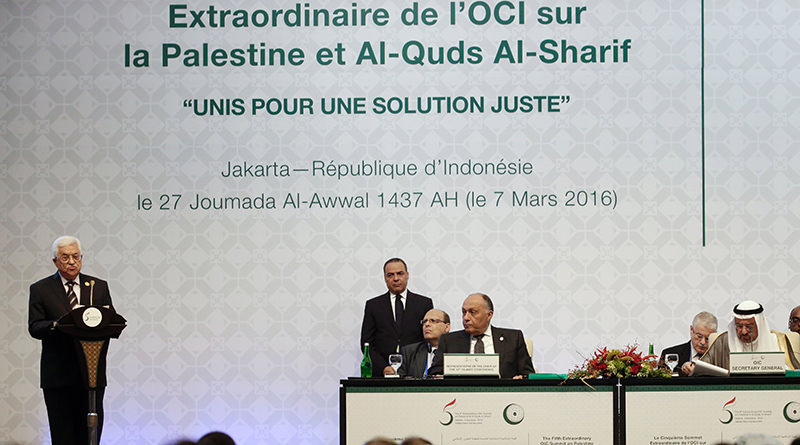 Palestinian president Mahmud Abbas (L) delivers a speech in Jakarta during the plenary session of the 5th Extraordinary Organization of Islamic Cooperation (OIC) Summit on the Palestinian territories on March 7, 2016. (AFP Photo)
by Compiled from Wire Services Mar 07, 2016 12:00 am
Leaders of Muslim countries on Monday urged Israel to end the occupation of Palestinian territories, while calling on the international community to boycott products from occupied territories.

"We call for an end to Israel's colonization and the creation of a Palestinian state based on the two-state solution," said Indonesian President Joko Widodo, reading out the leaders' statement at the end of an emergency summit of the Organization of Islamic Cooperation (OIC) in Jakarta.

"The Muslim world encourages the international community to ban the entry of Israeli products" from occupied territories, Joko added.

The OIC leaders supported efforts for Palestinian unity and pledged to protect Jerusalem, including by providing financial aid, the statement said.

The Indonesian president earlier Monday told Israel that the international community's patience "has long run out."

"As part of the international community, Israel must immediately stop its illegal activities and policies in occupied territories," Joko said at the opening of the summit.

The summit, organized at the request of the Palestinian Authority, discussed the deteriorating situation in occupied territories following a recent spate of violence.

Delegates from 49 of the 57 OIC member countries attended. A handful sent heads of state, while most were represented by foreign ministers or other officials.

Answering journalists' questions on the sidelines of the last day of the Organisation of Islamic Cooperation's (OIC) 5th Extraordinary Summit in Jakarta,Deputy PM Numan Kurtulmuş said that delegates needed to underline that the failure to achieve world peace is due to an inability to achieve peace in the Middle East.

"Without peace in the Middle East, the world cannot be left without terrorism."

"We work constantly to bring back our land and ... to establish a national unity government," Abbas said in his speech at the summit.

"We have approached our brothers in Gaza," he said, referring to Hamas, which controls that part of the Palestinian territories. "If there is goodwill, if there is a desire, we can establish a unity government in a few months."
Last Update: Mar 08, 2016 12:42 am
RELATED TOPICS