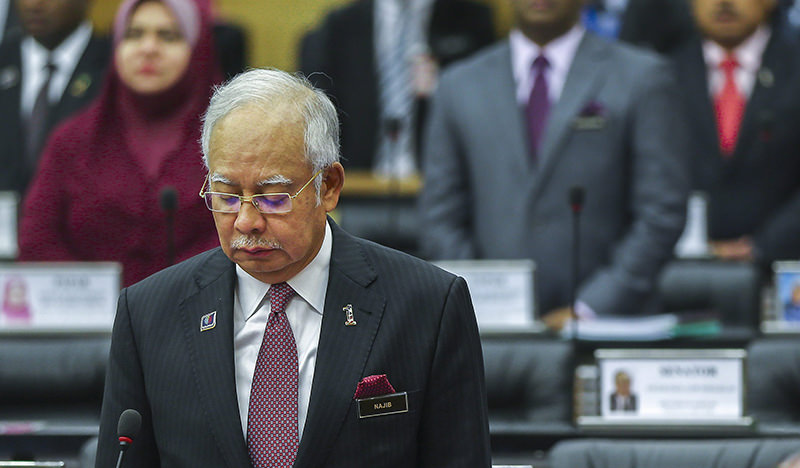 Malaysian Prime Minister Najib Razak observes a moment of silence to mark the second year since the disappearance of Malaysia Airlines flight MH370, at the Parliament in Kuala Lumpur (EPA Photo)
by Mar 08, 2016 12:00 am
Malaysian police foiled a plot by Daesh terrorist group to kidnap Prime Minister Najib Razak and other senior ministers last year, the country's deputy premier said on Tuesday.

Ahmad Zahid Hamidi, who is also the home minister, said the militants also planned to carry out attacks in the administrative capital, Putrajaya, for which explosives had been prepared and tested.

"On Jan 30, 2015, there were plans by 13 people linked to Daesh to kidnap the country's leaders including the prime minister, the home minister and the defence minister," Ahmad Zahid said in response to a question about the government's efforts to tackle the threat posed by Daesh.

"There was also a plan to carry out an attack in Putrajaya. To this end, the group had prepared and tested explosives," Zahid said.

"Although there is no proper Daesh establishment in the country, those here (in Malaysia) were being influenced and have been receiving orders from the Daesh network in Syria," he added.

Muslim-majority Malaysia has not experienced any significant attacks, but it has arrested at least 160 people since January 2015 suspected of being involved in militant activities, including seven believed to have been part of an Daesh cell.

The country has been on high alert since Daesh-linked terrorists carried out an armed attacks in Jakarta, Indonesia on Jan 14.

Zahid said between Sept 2014 and May 2015, Daesh members had planned four major attacks across the country, including in the capital Kuala Lumpur, Putrajaya, and the state of Kedah.

The plans had included stealing weapons from military camps, the making of bombs and explosives, stealing cash for funding attacks and kidnapping state leaders for ransom, Zahid said.

The targets for attacks included entertainment centres and religious buildings including a Shiite mosque, a Buddhist temple and a Freemasons' lodge.