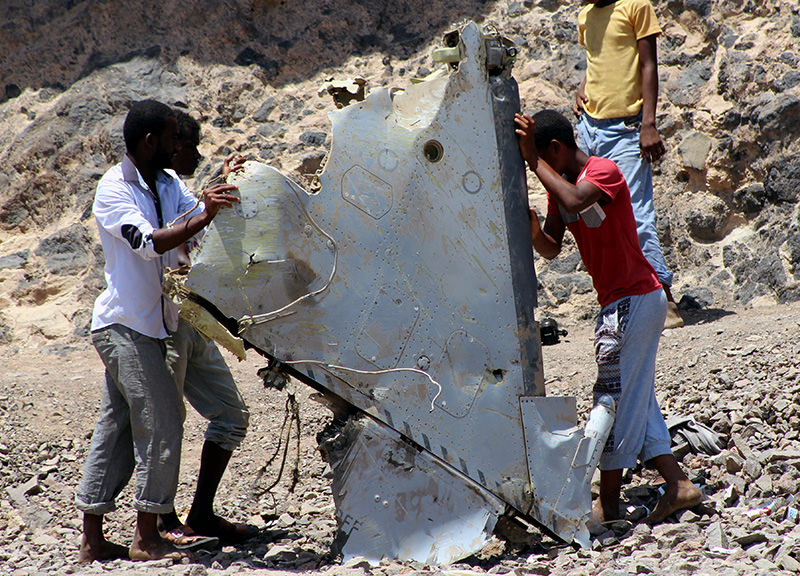 Two Emirati pilots were killed when their fighter jet crashed on Monday in Yemen, where a Saudi-led coalition is battling Iran-backed rebels, the alliance said.

The Mirage jet crashed at dawn "due to a technical fault," said the coalition statement published by Saudi state news agency SPA, hours after the United Arab Emirates (UAE) said one of its jets had gone missing.

In a statement on the UAE's official WAM news agency, the Emirati armed forces had said the jet was "missing" without giving details.

It is the first known case of an Emirati jet from the coalition crashing since the Saudi-led campaign against the Iran-backed rebels began in March last year.

Security officials and witnesses in Aden told AFP that a jet had crashed into a nearby mountain as coalition warplanes operated in the vicinity after clashes erupted between Yemeni forces and rebel groups.

Footage from the foot of a hill near Aden showed locals pointing to debris strewn in the area and saying it belonged to the crashed jet.

Al-Qaida and the Daesh group have taken advantage of the conflict between Iran-backed insurgents and pro-government forces to reinforce their presence in the south, including in Aden.

A government official told AFP that a coalition jet had carried out an air raid against the home of a local Daesh commander at dawn, killing his 18-year-old son near the plane crash site.

The UAE jet is the third coalition warplane to go down since March 2015. In December, a Bahraini F-16 crashed in Saudi Arabia due to a "technical error." The pilot was saved and the plane's wreckage was found. In May, a Moroccan jet crashed in Yemen. Its pilot was later found dead and his body was returned home.

The coalition said at the time that the crash had been caused by a technical fault or human error, denying rebel claims that they had downed the plane.

Saudi Arabia and the UAE, which play key roles in the coalition, have suffered the alliance's heaviest losses in Yemen, with dozens of soldiers killed.

In Yemen itself, more than 6,100 people have died -- half of them civilians -- since the coalition launched its campaign, according to the United Nations.

Saudi Arabia mounted an Arab air campaign against the rebels after they closed in on President Abedrabbo Mansour Hadi in his refuge in Aden, forcing him to flee to Riyadh.

Hadi and senior officials spend most of their time in Riyadh as security situation in Aden continues to worsen.

The Huthi rebels overran capital Sanaa unopposed in September 2014 and went on to expand their control across the south Arabian Peninsula country.