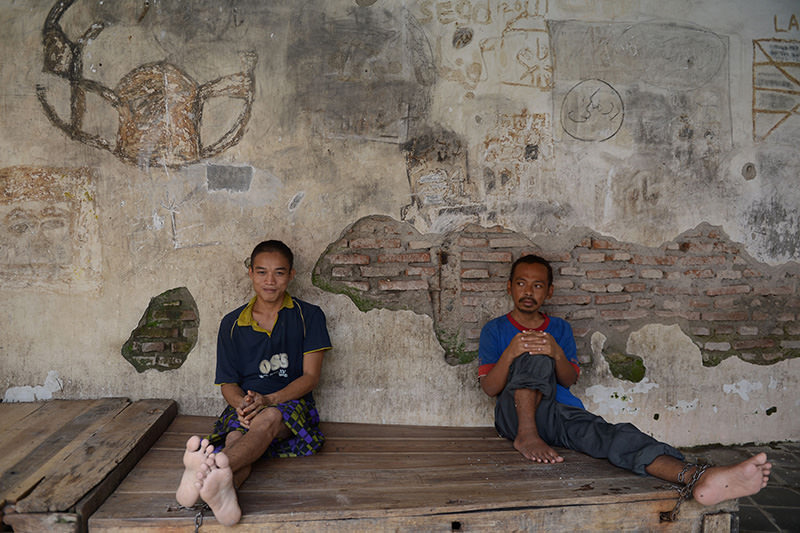 In a small faith healing center in rural Indonesia, Sulaiman chanted in a confused fashion, tugged at a chain attached to his ankle, and shifted restlessly on a hard, wooden bench.

The emaciated man has been chained up for the past two years, and is one of thousands of Indonesians with a mental illness currently shackled, according to a Human Rights Watch (HRW) report released Monday.

Chaining up the mentally ill has been illegal in Indonesia for nearly 40 years but remains rife across the country, especially in rural areas where health services are limited and belief in evil spirits prevail, according to HRW.

"Nobody should have to be shackled in Indonesia in 2016 -- people told us again and again that it's like living in hell," Kriti Sharma, disability rights researcher at the group and author of the report, told AFP.

As well as shackling, the report listed a litany of other abuses the mentally ill face in Indonesia -- sexual violence, electroshock therapy, and restraint and seclusion in often overcrowded, unsanitary institutions.

There are just 48 mental hospitals in Indonesia, a country of 250 million, most of them in urban areas. Treatment options are scarce for the millions living in remote regions, leaving desperate families to turn to faith healers in the Muslim-majority nation, some of whom chain up patients.

The story of Sulaiman, who like many Indonesians goes by one name, is all too common. His family did not know what to do when he began throwing rocks through his neighbor's windows, so they took him to the faith healing center near the town of Brebes on the main island of Java.

Now he spends his days chained to a wooden bench, either in the dilapidated, foul-smelling courtyard of the center or in a dark room with bare, concrete walls.

"I am a stupid man," he chanted, during a recent visit by AFP, as he squirmed around on the bench. Nearby, another shackled man urinated where he stood unable to reach two reeking, doorless bathrooms.

In a dark, cell-like room, a man who only gave his name as Awan said he was often chained up to a wooden bed "24 hours a day".

There is no attempt to give the patients a proper diagnosis, with Sholeh Mushadad, one of the men running the center, simply saying their families bring them in as they are "not normal".

Those confined in the facility are not given medicine but treated with prayers and baths in herbal concoctions, explained Mushadad, who with his brother and elderly father oversee the roughly 25 patients.

He also defended the practice of shackling them: "We don't have any other option. It's for safety reasons that their feet are chained."

HRW -- who interviewed around 150 people for their report, from the mentally ill to health professionals -- said there are currently almost 19,000 people in Indonesia who are either shackled or locked up in a confined space, a practice known locally as "pasung".

At least 14 million people in Indonesia aged 15 and over are thought to be suffering from some form of mental illness, according to health ministry data.

Shackling of mentally ill people happens across Asia but is particularly common in Indonesia, with studies showing that it is due to poor mental health services in rural areas and a lack of knowledge about suitable treatments.

Families that choose not to send mentally ill relatives to faith healers sometimes take matters into their own hands.

In a simple home near Brebes, 25-year-old Waspiah has been locked in a goat shed alongside bleating farm animals for three days, her parents only letting her out to use the bathroom before returning her to the cramped bamboo cage.

Her elderly father Fatoni told AFP the family locked her up after she ran away from home and began disturbing the neighbors, but insisted it would only be a temporary measure -- not like a previous occasion when they kept her confined for two years.

The Indonesian social affairs ministry vowed in January to stamp out "pasung" but identical campaigns in the past have failed to break the widely held belief that chaining or confining the mentally ill in stocks or isolated rooms is acceptable.

Nahar, who is the head of disability issues at the social affairs ministry, acknowledged that shackling remained a big problem but said it would take time to fix.

"The main problem is fear, fear of what could happen if a shackled person is released," he said.