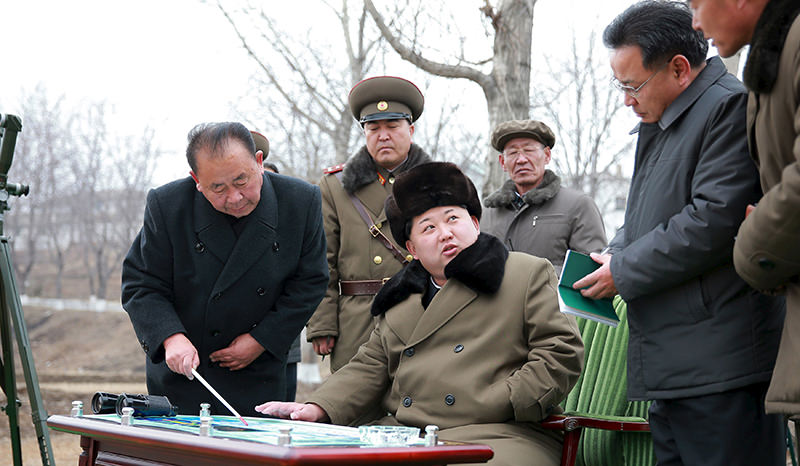 North Korean leader Kim Jong Un gives instruction during a simulated test of atmospheric re-entry of a ballistic missile, in Pyongyang on March 15, 2016 (Reuters Photo)
by Compiled from Wire Services Mar 21, 2016 12:00 am

North Korea launched five short-range missiles into the sea off the east of the peninsula on Monday, a news report said, amid protests from Pyongyang over ongoing US-South Korean military drills.

The isolated communist regime has launched missiles three times since the March 10 start of the annual military exercises, which it has called a rehearsal for invasion.

It fired two missiles into the sea on March 14, followed by two ballistic missiles Friday, of which one reached the sea, and the other apparently exploded in flight, Yonhap reported.

Tensions have been soaring on the divided Korean peninsula since the North carried out its fourth nuclear test on January 6, followed a month later by a long-range rocket launch that was widely seen as a disguised ballistic missile test.

The Security Council responded earlier this month by imposing its toughest sanctions on North Korea to date.

In recent weeks, Pyongyang has maintained a daily barrage of nuclear strike threats against both Seoul and Washington, ostensibly over ongoing large-scale South Korea-US military drills that the North sees as provocative rehearsals for invasion.

An official with South Korea's Joint Chiefs of Staff said the five short-range missiles were launched from near the eastern city of Hamhung, beginning just before 3:20pm (0620 GMT), and landed in the East Sea (Sea of Japan).

He said analysts were still gathering intelligence on the precise missile type.

The North had fired two short-range missiles into the East Sea on March 10, using what state media described as a new high-calibre multiple rocket launcher.