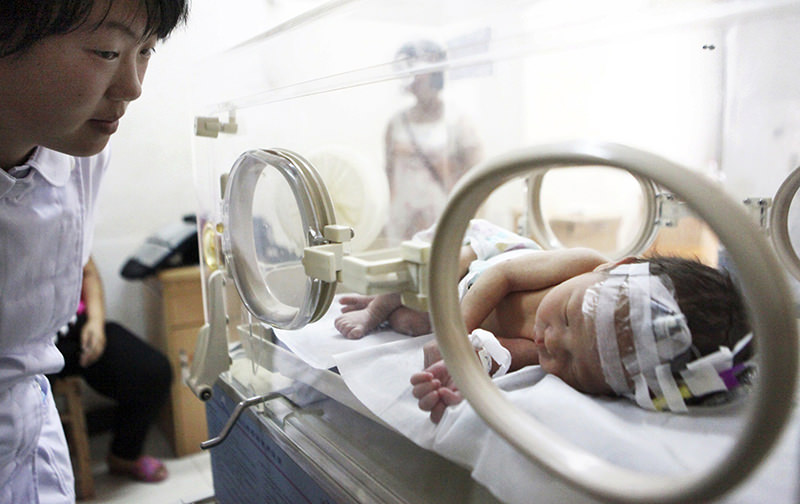 A nurse (L) looks at an abandoned newborn baby resting in an incubator after he was rescued from a sewage pipe at a hospital in Jinhua, Zhejiang province May 28, 2013.(Reuters Photo)
by Mar 25, 2016 12:00 am

A teenage volleyball player in China gave birth to a baby in a gymnasium toilet before leaving the girl in some bushes and returning to her tournament, state-run media reported Friday.

The girl went into labour while filming a match at the national under-18s women's volleyball championship in Changxing city in the eastern province of Zhejiang on Wednesday, the Hangzhou Daily said.

She gave birth alone in the toilet before placing the baby in the bushes near the gymnasium "out of fear", the report said, then went back inside to continue recording the match.

The infant was discovered by a passerby, who followed a trail of blood on the ground to find the mother, the report said.

"She was resting near the courtside," the website of the People's Daily quoted the passerby, surnamed Wang, as saying.

"She looked fine after giving birth. I assumed that she must have a strong body to give birth to a baby during the match."

The newborn and the mother were rushed to hospital for treatment, it added. Both were safe.

Chinese babies born out of wedlock are sometimes abandoned because of social and financial pressures. The country's family-planning policy can mean heavy fines for couples who have more than two babies.

A newborn was rescued from a toilet sewage pipe on Sunday in Xinping county, in the southwestern province of Yunnan, according to a website run by the fire department of China's public security ministry.

It took firefighters nearly three hours to take the pipe apart, piece by piece, in order to pull the baby out, said the report.

It did not state whether the baby -- whose gender was not given -- was thought to have ended up in the pipe deliberately or by accident, or mention its mother.

Local officials told AFP they were not aware of the case.

In 2013, a baby boy was also saved from a sewage pipe after his 22-year-old unmarried mother gave birth unexpectedly as she used a squat toilet.