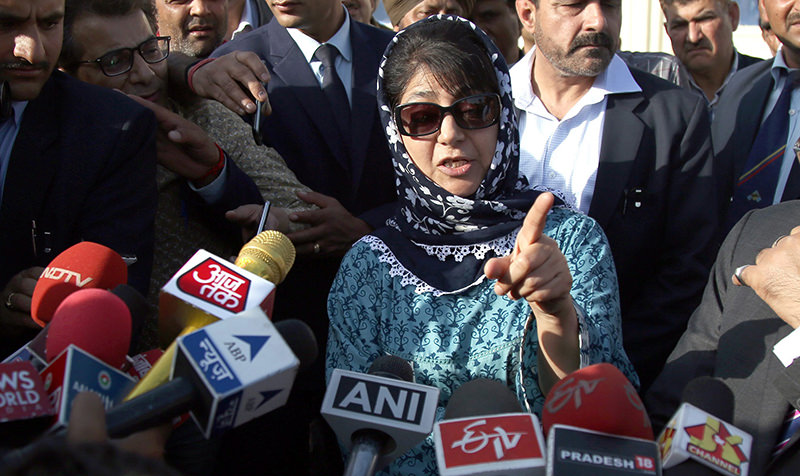 People's Democratic Party (PDP) president and Parliament member, Mehbooba Mufti speak to the media after a meeting with Jammu and Kashmir Governor NN Vohra (EPA Photo)
by Compiled from Wire Services Apr 04, 2016 12:00 am
The leader of a pro-India party on Monday became the first woman to become the chief minister of Indian Kashmir following the death of her father, the region's top elected leader.

India's only Muslim-majority state had been ruled directly from New Delhi since the death in January of Mufti Mohammad Sayeed, who formed an uneasy alliance with the nationally ruling Hindu nationalist Bharatiya Janata Party after a 2015 election.

His daughter, who heads the moderate People's Democratic Party (PDP) that he founded in 1999, had initially appeared reluctant to continue the unpopular coalition.

The alliance marked the first time the rightwing BJP held a leadership position in the Muslim-majority region also claimed by India's archenemy, Pakistan.

The PDP emerged as the single-largest party with 28 seats in the region's 87-strong state legislature, while the BJP won 25 seats all in Hindu-dominated districts.

The two parties hold diametrically opposite views on several issues, such as a law that protects Indian military personnel from criminal prosecution in the violence-wracked Himalayan region. The PDP wants the law scrapped, which the BJP opposes.

The BJP also opposes a special constitutional status for Kashmir, which allows the region to make its own laws, while regional parties including the PDP defend it.

Rebels have been fighting against Indian rule in the state since 1989. More than 68,000 people have been killed in the uprising and a subsequent Indian military crackdown.
Last Update: Apr 04, 2016 4:14 pm
RELATED TOPICS