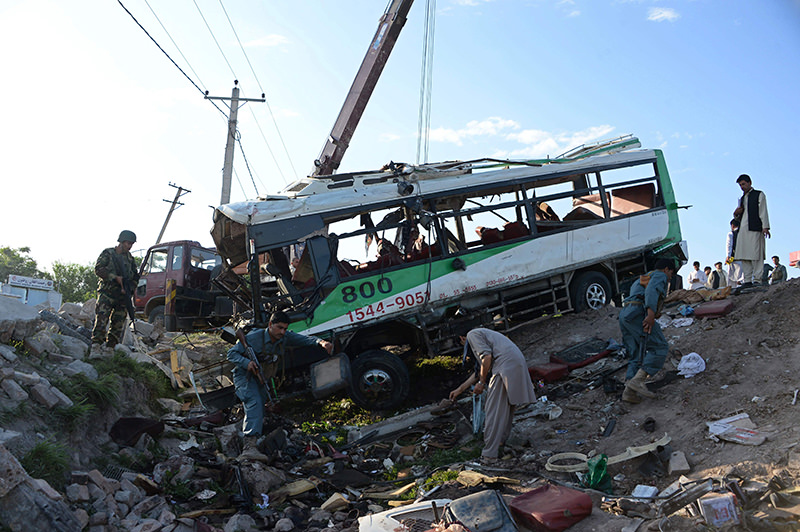 A Taliban suicide bomber on a motorcycle killed at least 12 army recruits on a bus in eastern Afghanistan on Monday, officials said, hours after a similar attack killed two people in the capital Kabul.

The latest blast hit a bus in the Sorkh Rud district of Nangarhar province, which borders Pakistan. Twelve bodies and at least 38 wounded had been taken to the main hospital in Jalalabad, the principal city in eastern Afghanistan, hospital chief Ihsanullah Shinwari told Reuters.

The number of casualties was expected to rise, several officials said.

"The suicide bomber was on a three-wheel motorcycle and targeted new army recruits who were heading to Kabul for training," said a police official, who asked not to be identified because he was not authorized to discuss matters concerning the Afghan army.

Defense Ministry spokesman Dawlat Waziri confirmed one of the ministry's buses carrying army recruits had been attacked but put the number of wounded at 26.

"It was a crowded area and it is hard to say now how many of them were from the defense ministry," Waziri said.

Taliban spokesman Zabihullah Mujahid said the militant group had carried out the attack outside Jalalabad. However, no group had claimed responsibility for the Kabul attack.

Government workers and members of the security forces are often targeted by insurgent groups, including the Taliban, who are seeking to topple the U.S.-backed government in Kabul.

The Taliban have stepped up their insurgency since most foreign troops withdrew from Afghanistan at the end of 2014, although Kabul had enjoyed a period of relative calm during the harsh winter months.

That lull was expected to end soon with the Taliban poised to launch their annual spring offensive.

In Kabul, bus conductor Rahim Gul said the force of the blast threw him out of the vehicle.

"We picked up the Education Ministry staff and we were driving on the road when there was an explosion," Gul told Reuters Television.

"It was very powerful and threw me out of the car window. A few minutes later I found myself in a wheat field and then I rushed to the site of the attack and helped some injured people and they were taken to hospital."