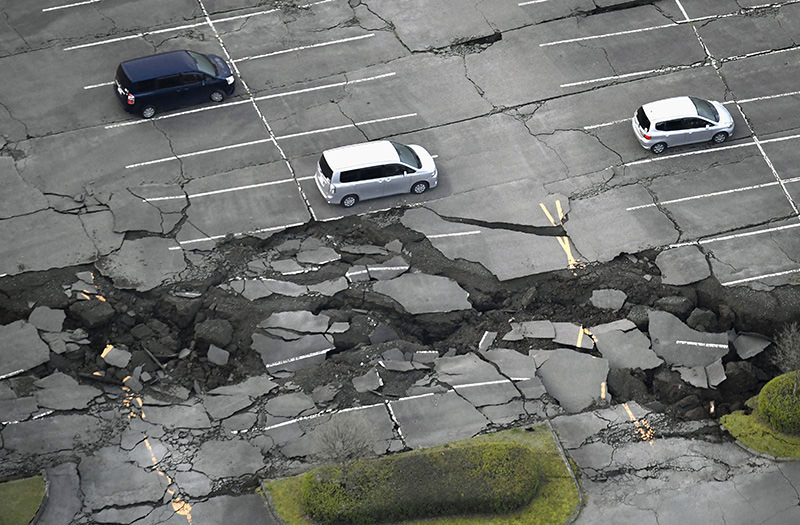 Two powerful earthquakes a day apart shook southwestern Japan, killing at least 39 people and injuring 1,500, as thousands of army troops and other rescuers on Saturday rushed to save scores of trapped residents before weather turns bad.

Officials had said earlier Saturday that 10 had died in Thursday's quake and 22 in Saturday's.

Kyodo says four people remain missing in Minamiaso. The village near Mount Aso volcano appears to have been the hardest hit by the second earthquake.

The exact number of casualties remained unclear. Oncoming rains could further complicate the relief operation and set off more mudslides in isolated rural towns, where people were waiting to be rescued in collapsed homes.

Kumamoto Prefectural official Tomoyuki Tanaka said the death toll was climbing, with the latest standing at 19 from Saturday's magnitude-7.3 quake that shook the Kumamoto region on the southwestern island of Kyushu at 1:25 a.m. On Thursday night, Kyushu was hit by a magnitude-6.5 quake that left 10 dead.

Chief Cabinet Secretary Yoshihide Suga said that 1,500 people have been injured, 80 of them seriously. Nearly 70,000 have left their homes, he said.

Japanese Prime Minister Shinzo Abe expressed concern about secondary disasters as the weather forecast showed rain and strong winds later in the day. Rainfall can set off mudslides as the soil has already been loosened by the quakes.

"Daytime today is the big test" for rescue efforts, he said. Landslides have already cut off roads and destroyed bridges, slowing down rescuers.

Police received reports of 97 cases of people trapped or buried under collapsed buildings, while 10 people were caught in landslides in three municipalities in the prefecture, Kyodo News reported.

TV footage showed of a collapsed student dormitory of Tokai University, which was originally two floors, but now looked like a single story building. A witness said he heard a cry for help from the rubble. Two students were reported to have died.

In Mashiki, where people have been trapped beneath the rubble for hours, an unconscious elderly woman was dragged out from the debris of her home. Her son-in-law Tatsuhiko Sakata said 93-year-old Yumiko Yamauchi had refused to move to shelter with him after the first quake Thursday.

"When I came to see her last night, I was asking her: 'Mother? I'm here! Do you remember me? Do you remember my face?' and she replied with a huge smile filled with joy. A kind of smile that I would never forget. And that was the last I saw of her," Sakata said.

The area has been rocked by aftershocks, including the strongest with a magnitude of 5.4 Saturday morning. The Japan Meteorological Agency said that Saturday's may be the main quake, with the earlier one a precursor. The quakes' epicenters have been relatively shallow — about 10 kilometers (6 miles) — and close to the surface, resulting in more severe shaking and damage. NHK TV said as many as eight quakes were being felt an hour in the area.

One massive landslide tore open a mountainside in Minamiaso village in Kunamato Prefecture all the way from the top to a highway below. Another gnawed at a highway, collapsing a house that fell down a ravine and smashed at the bottom. In another part of the village, houses were left hanging precariously at the edge of a huge hole cut open in the earth.

Suga told reporters the number of troops in the area was being raised to 20,000, while additional police and firefighters were also on the way. He said 1,500 people were injured, including 80 seriously, and nearly 70,000 had left their homes.

He pleaded with people not to panic. "Please let's help each other and stay calm," he said in a nationally televised news conference.

In a hot springs resort, dozens of people trapped were picked up by military helicopters, Asahi TV reported.

Mount Aso, the largest active volcano in Japan which is located on Kyushu, erupted for the first time in a month, sending smoke rising about 100 meters (328 feet) into the air, but no damage was reported. It was not immediately clear if there's a link the seismic activity and the eruption. The 1,592 meter (5,223 foot) high mountain is about 1 ½ hour drive from the epicenter.

NHK TV showed stones tumbled from the walls of historic Kumamoto Castle, and a wooden structure in the complex was smashed. At the Ark Hotel, east of the castle, hotel guests woke up to strong shaking and a warning siren.