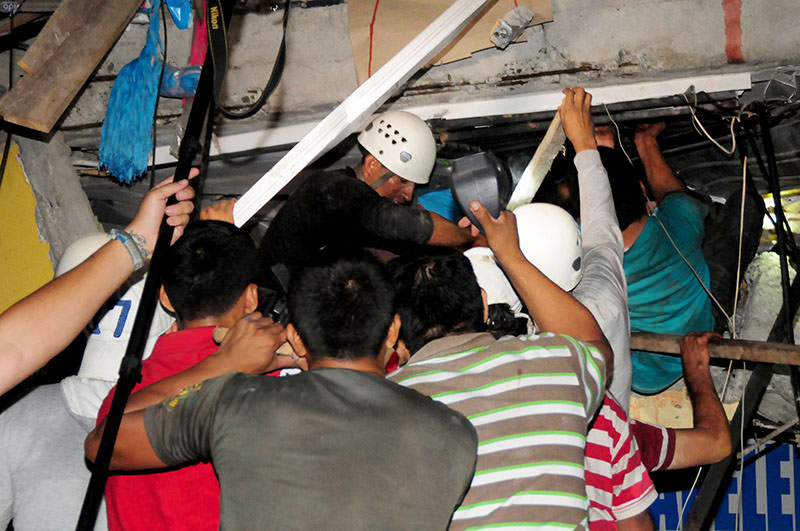 Rescue workers work to pull out survivors trapped in a collapsed building after a huge earthquake struck, in the city of Manta early on April 17, 2016 (AFP)
by Daily Sabah with Agencies Apr 17, 2016 12:00 am

Ecuador was hit by the strongest earthquake in decades, killing at least 233 people and leaving over 580 injured. A state of emergency was declared in the six worst-hit provinces in the country

The strongest earthquake to hit Ecuador in decades flattened buildings and buckled highways along its Pacific coast. President Rafael Correa said at least 233 people had died and rescuers were struggling to reach survivors trapped in the rubble.

The magnitude-7.8 quake, the strongest to hit Ecuador since 1979, was centered on Ecuador's sparsely populated fishing ports and tourist beaches, 170 kilometers northwest of Quito, the capital.

Correa reported the death toll on his official Twitter account while flying back from Rome to deal with the crisis. Officials earlier had reported more than 580 people injured.

"Oh, my God, it was the biggest and strongest earthquake I have felt in my whole life. It lasted a long time, and I was feeling dizzy," said Maria Torres, 60, in the capital Quito, which was rocked by the late Saturday quake.

The quake lasted about a minute and was felt across Ecuador, northern Peru and southern Colombia. Vice President Jorge Glas said the death toll will likely rise further in what he called the "worst seismic movement we have faced in decades." He also said there were deaths in the cities of Manta, Portoviejo and Guayaquil — all several hundred kilometers from the center of the quake struck shortly after nightfall Saturday.

A state of emergency was declared in the six worst-hit provinces.

Ecuador's Risk Management agency said 10,000 armed forces had been deployed to help. In addition, 3,500 national police were sent to the towns of Manabí, Esmeraldas and Guayas y Santa Elena; 500 firefighters were heading to Manabi and Pedernales and five shelters had been set up for those who had to evacuate their homes.

Police, the military and the emergency services "are in a state of maximum alert to protect the lives of citizens," Glas said. President Rafael Correa, on a visit to the Vatican, wrote on Twitter that he was immediately returning to Ecuador.

Ecuador's Geophysical Office reported "considerable" structural damage "in the area near the epicenter as well as points as far away as the Pacific port city of Guayaquil."

The US Geological Survey (USGS) said the 7.8-magnitude shallow quake struck off the northwest shore of Ecuador, just 27 kilometers from the town of Muisne. Glas gave a slightly lower measurement of magnitude 7.6.

At least 55 smaller aftershocks rattled the country after the main quake, Glas said. The Hawaii-based Pacific Tsunami Warning Center initially issued a warning for the nearby Pacific coastline but later said that the threat had largely passed.

In the capital Quito, people fled into the streets in fear as the quake shook their buildings. It knocked out electricity in several neighborhoods and six homes collapsed but after a few hours, power was being restored, Quito's Mayor Mauricio Rodas said.

Sports events and concerts were canceled until further notice nationwide.

Cristina Duran, 45, grabbed her three pets and stood under a large doorway to avoid shards of glass falling from shattered windows. "I was frightened. And I just kept asking for it to be over," she told AFP.

Authorities closed the airport in the western city of Manta, saying the control tower suffered "severe damage." President Correa, interviewed by phone on Radio Publica, called for "calm and unity." Correa said that rescue teams were flying in from Mexico and Colombia to help search for quake victims and expressed solidarity with the families of the deceased. The quake was also felt in northern Peru and a large section of southern Colombia, according to authorities in those countries, although no casualties were reported. Peruvian officials however urged coastal residents to stay away from the beach.