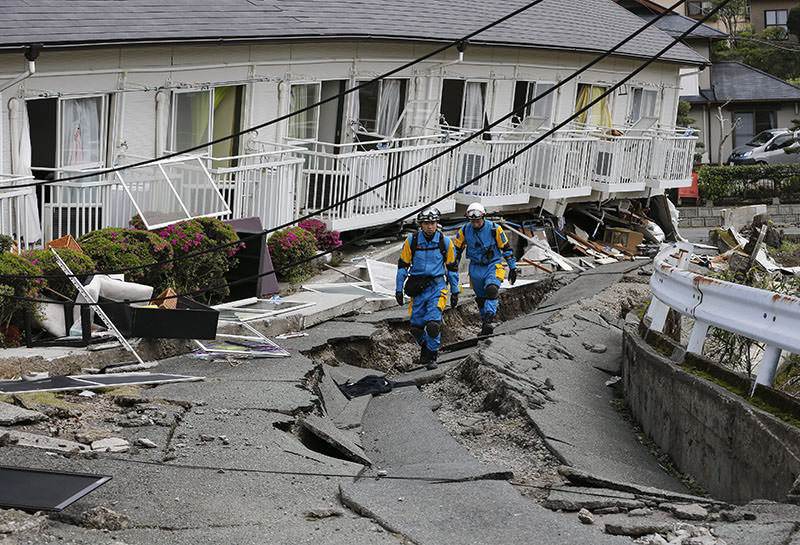 While the death toll from the temblors Thursday night and early Saturday stood at 42, officials in Kumamoto Prefecture reported that around nine people remained unaccounted for, according to news broadcaster NHK.

Prime Minister Shinzo Abe suggested Monday that a supplementary budget may be established after the earthquakes, stressing that the government "would like to take every necessary measure" and "will firmly assist restoration and rehabilitation".

He confirmed that the government also planned to double its emergency food supplies to 1.8 million servings through Tuesday.

According to the government of Kumamoto Prefecture, 104,900 people remained at shelters Monday morning, after more than 530 aftershocks and 50 landslides hit the region following Thursday's magnitude 6.5 temblor.

The second quake, which registered 7.3 on the Richter Scale early Saturday, was considered the main event and resulted in further destruction of private homes, bridges, roadways and expressways.

While some shelters in the prefectural capital, Kumamoto, reportedly lacked breakfast materials Monday, aircraft belonging to the United States military -- such as the C-130 transporters -- were set to assist in disaster relief operations.

Four MV-22 Osprey aircraft based in Okinawa were due to transport 20 tons of supplies -- including food, water and blankets -- to Minamiaso village, where those missing were reported.

Weather agency authorities have called for people to remain alert amid the possibility of strong quakes and landslides caused by rainfall in the coming days.

More than 2,400 buildings in Kumamoto Prefecture were damaged or destroyed, according to NHK.

Bullet train services in the region were suspended, and flights to and from Kumamoto Airport cancelled after the ceiling of its terminal building collapsed.

Tokyo stocks plummeted Monday amid concerns of the tremors impacting the economy, with the share market losing 572.08 points, or 3.40 percent, from Friday, according to Kyodo.

Shares for Toyota Motor Corp., which stopped production at most of its plants countrywide due to parts shortages, dropped 5.1 percent, while those of Honda Motor Co. Mitsubishi Motors declined 4.5 percent and 3.8 percent, respectively.