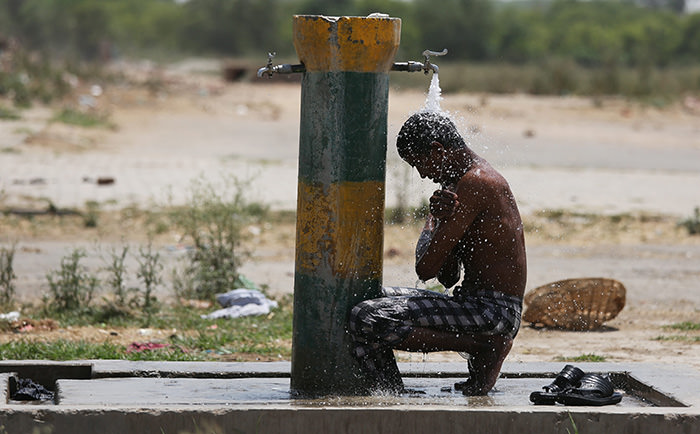 An Indian laborer cools off under a water tap on a hot afternoon in Amritsar, India, 26 May 2015 (EPA Photo)
by Apr 21, 2016 12:00 am
More than 100 people are feared dead in India in an early-summer heat wave which forced schools to close and halted outdoor work like construction, government officials said on Thursday.

Neighbouring Pakistan, which suffered its hottest spell in decades last year, plans to open 500 response centres to provide shelter and cold water to people if a heat-wave warning is issued, a government official said. No heat deaths have yet been reported.

India's hottest months are May and June, but some states have already registered temperatures in excess of 40 degrees Celsius (104 degrees Fahrenheit), forcing authorities to take emergency steps.

In the southern Indian state of Telangana, 45 people have died from heat exposure, and another 17 in Andhra Pradesh, officials said. Some 43 were believed to have died in neighbouring Odisha, although an official there said each of the deaths was being investigated.

Y.K. Reddy, a director at the Indian Meteorological Department, said Telangana has recorded its highest April temperatures since at least 2006.

Reddy said there were worries the death toll in Telangana could rise and his department was issuing heat-wave warnings to advise people to stay indoors.

Schools in Telangana were shut last week two weeks ahead of their summer holidays. As an emergency measure, Odisha has ordered schools to remain closed until April 26 and banned construction work during the hottest times of day.

Some small-scale businesses were already suffering.

"I am closing my shop before noon because it is too hot," said Tulu Sahu, a small grocery seller in Bhubaneshwar city in Odisha. "You cannot stay in the shop."

Pakistan, where extreme heat killed more than 1,000 people during the Muslim fasting month of Ramadan last year, has started gearing up to tackle any sudden rise of patients who report heat-related illnesses.

"We have enough supplies and staff to meet the possible situation," said Seemin Jamali, head of the accident and emergency department at Karachi's Jinnah Hospital.