Still searching for shelter, a year after Nepal quake 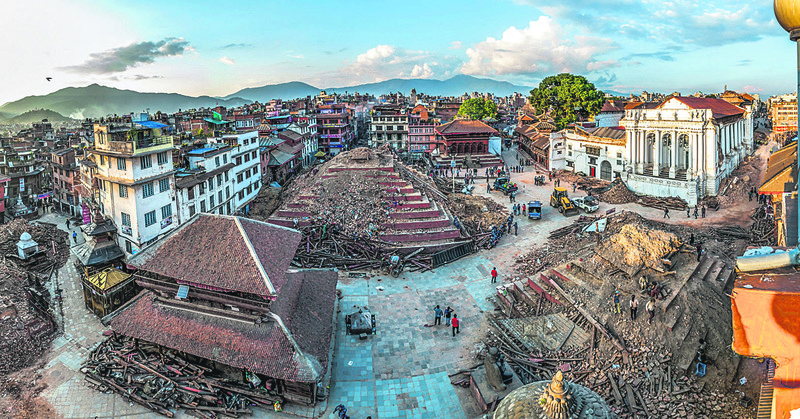 by Anadolu Agency Apr 26, 2016 12:00 am
For more than 10 months Rameshwar Shrestha and his family of seven have spent their days and nights in a flimsy tent pitched on a patch of barren land in this historic Nepali town.

Made homeless by the 7.8-magnitude earthquake that struck Nepal last year, the 38-year-old hardware shop owner's elderly parents, his wife, a six-year-old son and two sisters endured monsoon rains and then the harsh Himalayan winter.

"When it rains, the water enters into our bed. We fear someone will break into our tent because we cannot lock it from inside," said Shrestha, whose family is among half a dozen displaced who have moved to this small patch of land a few meters down the main road of Sankhu, only 20 kilometers east of the capital Kathmandu.

Earlier this year, Shrestha ran out of patience and decided to take matters into his own hands: he began building a new home on the land where his five-story building once stood.

On a recent afternoon, a pair of workers hammered nails into a wooden structure and laid bricks on the wall. Boulders ready to be crushed were piled up in front of the cement-and-concrete structure that was beginning to take the shape of a home.

Shrestha, a wiry man with disheveled hair, said he was hastening the construction because he was concerned their fraying tent could not withstand another monsoon.

"I need to look after my parents and my family. We can't live in temporary shelter forever. We heard that the government would provide housing for the displaced but that turned out to be false. So I began building the house with money from my savings," he told Anadolu Agency.

A year after the April 25 quake that killed almost 9,000 people - Nepal's biggest natural disaster in over 80 years - hundreds of thousands of survivors like Shrestha feel they have been left to fend for themselves, forgotten by the coalition government in Kathmandu.

For Nepal's most marginalized citizens, thoughts have turned to the upcoming monsoon season, just as they had in the earthquake's immediate aftermath, when landslides triggered by rains threaten communities in mountainous regions.

Nepal formed the National Reconstruction Authority (NRA) after the quake following a successful donor's conference in June last year, when $4.1 billion was pledged, but the reconstruction authority has since failed to make headway, disappointing both donors and survivors. After months of foot-dragging due to political wrangling, the NRA took its full shape only in December last year. Its work has barely begun: last month, the authority handed the first of the three installments of a 200,000 rupee ($200) grant to 641 people in Singati, a village devastated by a second major quake that struck Nepal on May 12 last year.

Even after its formation, top government officials have shown little interest in joining the NRA due to fears of public scrutiny-Nepal's government agencies have a poor record of spending aid money because of bureaucratic barriers. Nepal's inability to hold local elections for nearly two decades has further exacerbated the problem.

Officials at the reconstruction authority, while stressing that they have worked only for the last three months, attribute the delay to a lack of banking access in the earthquake-affected areas and shortages of human resource.

"There are a lot of challenges such as security and staff management in distributing money. We also had to carry out fresh surveys to assess the damages to homes. We hope to expand the distribution of funds to the rest of the regions by the earthquake anniversary," said Ram Prasad Thapaliya, a NRA spokesperson.

"We are still hiring engineers to do the surveys. We also had to spend a lot of time to formulate new laws. There's a wrong perception among the homeless that we will build their homes. Our job is to hand them grants and monitor the reconstruction to ensure the home builders follow the new building codes," he told Anadolu Agency.

But with monsoon season only two months away, the displaced have found themselves racing against time to rebuild homes to avoid having to face the rainy season in makeshift shelters.

In Sankhu, which saw the deaths of over 100 people and destruction of more than 6,000 homes, there is little sign of reconstruction. Most homeless either live in temporary shelters or rented rooms.

When it's completed, Shrestha wants to reopen his hardware shop on the ground floor of his house. His old home was made of mud and brick. The new one may be a modern structure but it does not comply with new building codes, which require the house to have open space and be 1.5 meters away from roads.

A recent cross-party meeting in Sankhu gave a go ahead for the reconstruction of homes, according to Shrestha, who recalled the municipal officials saying the new building codes were not applicable to the town.
RELATED TOPICS