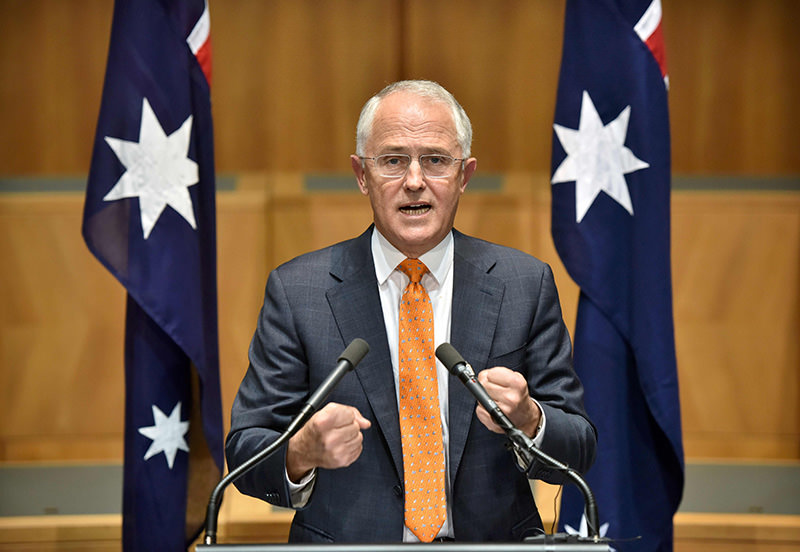 Australia's prime minister on Sunday officially called a July 2 election and put economic management at the forefront of his campaign to win a second three-year term for his conservative coalition during era of extraordinary volatility in the country's politics.

Kicking off a two-month election campaign, Prime Minister Malcom Turnbull said a center-left Labor Party win would prevent the Australian economy diversifying from a mining industry that had been hit hard by the Chinese slowdown and the associated falls in the prices of iron ore and coal, Australia's most lucrative exports.

"At this election, Australians will have a very clear choice: to keep the course, maintain the commitment to our national economic plan for growth and jobs or go back to Labor with its high-taxing, higher spending, debt and deficit agenda which will stop our nation's transition to the new economy dead in its tracks," Turnbull told reporters.

Turnbull and Labor leader Bill Shorten recently outlined their conflicting economic policies on how Australia should rein in mounting debt without slowing an already sluggish economy.

Neither man has ever led his party into an election campaign before and the eight-week campaign is the longest in decades.

Turnbull replaced his unpopular predecessor, Tony Abbott, in a leadership ballot of lawmakers in the Liberal Party in September, only two years after the coalition government was elected.

The change of prime ministers immediately boosted the government's standing in opinion polls, but recent polls suggest the government is now running neck-and-neck with Labor.

The government has released its budget plans for the next fiscal year, which begins on the eve of the election, calling for stimulus measures including income tax cuts for middle- and high-income earners and a gradual reduction of the company tax rate over a decade from 30 to 25 percent.

Shorten's Labor Party opposes most of the tax cuts and would spend the money saved on hospitals and schools.

Shorten said the government's budget was crafted for "Malcolm's millionaires" and offered nothing for the poor. He accuses Turnbull, a 61-year-old self-made multimillionaire, of being out of touch with ordinary folks.

A crucial election issue for many Australians is the policy differences on the Australian housing industry, which is a major strength of an economy hit hard by the Chinese slowdown and the associated lower prices for iron and coal — Australia's most lucrative exports.

Many analysts agree that housing is overpriced in major cities including Sydney, and that the proportion of Australians who can afford to buy their own homes is shrinking. Labor wants to reduce tax breaks on real estate to make it a less attractive investment for landlords. The plan is that investors won't price as many would-be owner-occupiers out of the housing market.

But the government has warned that property prices would tumble and damage the economy.

Australia for the first time has a prime minister and opposition leader who both argue that gay marriage should be legally recognized. A Shorten government would put legislation to allow same-sex marriage to the Parliament within its first 100 days in power.

Turnbull's government would ask the Australian public to vote on the issue in a plebiscite. The vote would not be legally binding and some conservative lawmakers have said they would vote down a gay marriage bill even if most Australians supported marriage equality.

Turnbull apparently called an early election because a hostile senate has refused to pass legislation that would allow the government to create a building industry watchdog called the Australian Building and Construction Commission. The ABCC was disbanded in 2012 by a former Labor government linked to the trade union movement.

While the plight of the ABCC seems an obscure issue to most voters, the political debate focuses attention on Shorten's history as a union official.

Before he entered Parliament in 2007, Shorten was a senior official of the Australian Workers Union, one of five unions targeted by a government-commissioned inquiry into union corruption. Labor condemned the inquiry as a politically motivated witch hunt.

Shorten rejected suggestions by inquiry lawyers that he had had conflicts of interest when companies made donations to his union while he was negotiating with them over workers' pay.