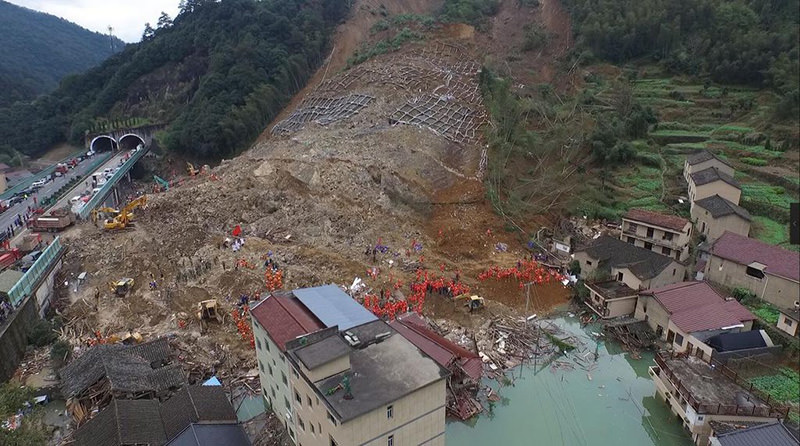 Rescuers on Sunday searched for 33 construction workers missing in a landslide at the site of a hydropower project following days of heavy rain in southern China. Eight other workers were pulled out alive, officials and state-run media reported.

Rocks and mud with a volume of 100,000 cubic meters (3.5 million cubic feet) buried an office building and the workers' living area at the site in mountainous Taining county in Fujian province around 5 a.m. Sunday, according to a website run by the county's Communist Party's publicity department.

State broadcaster China Central Television later reported that seven workers were rescued alive, with injuries including broken bones. By evening, rescuers had detected suspected signs of life at three spots, CCTV said. Mudslides and flooding had made some sections of roads unpassable, hindering rescuers' efforts to get heavy machinery to the site.

An official at the county department said by phone that the cause of the landslide was still unclear, but that the area had seen rainfall in the past few days.

Heavy rain has affected much of southern China since Wednesday, triggering floods and landslides.

The official Xinhua News Agency reported that a 75-year-old woman and her 3-year-old great-grandson were washed away in an overflowing river from Friday to Saturday in Hubei province. Rainstorms had earlier led to the evacuation of more than 1,000 people in Guangxi region, and collapsed a road in Guizhou province that left one person dead and one missing.

The Taining county official, who only gave his surname of Wei, said firefighters and police were attempting to reach the buried, who were working on a hydropower project.