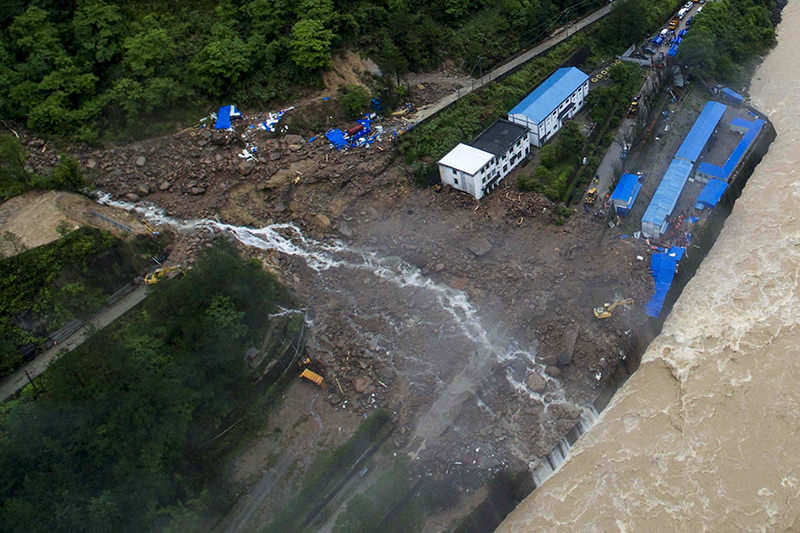 The death toll in Monday's landslide at the site of a hydropower project in China's southeastern Fujian province has risen to 35 people state media said on Tuesday.

State news agency Xinhua cited sources in mountainous Taining County as saying Tuesday that one other person remained missing, despite earlier reports putting the death toll at 34 with four others unaccounted for since the disaster early Sunday .

China Radio International (CRI) reported that another 14 people were still receiving treatment at a nearby hospital after sustaining injuries in the incident.

Li Xiaoqiang, chief of the hospital's surgery department, was quoted as saying that the majority of the patients are in a stable condition.

"Previously we worried that the extensive crush injuries will affect the victims' renal function, but it turned out that the effects of the impact were not that great," Li said. "Some victims just had scratches and as long as their company allows, they can return home in two or three days."

In December, a landslide in the southern city of Shenzhen buried 77 people. The government has blamed breaches of construction safety rules for that disaster and a number of officials have been arrested.

Rescuers aided by experts sent by the central government were rushing to search for signs of life and haul away stones and rocks, part of a 100,000 cubic meter (3.5 million cubic feet) mountain of displaced rubble that buried an office building and the construction workers' living area early Sunday.

"We were asleep when the mountains began to jolt very strongly and before we knew it, sand and mud were flowing into our room," survivor Deng Chunwu told the official Xinhua News Agency. It said he and three other workers survived by huddling underneath a supporting pole.

Their room was shifted a distance of 10 meters (30 feet) by the flowing mud, Deng said.

A number of others were being treated in hospital for bone fractures and other injures, Xinhua and state broadcaster CCTV said.

More than 600 rescuers, including firefighters and police, were searching for the missing and attempting to clear sections of roads leading to the site that had been made impassable by mudslides and flooding, hindering efforts to get heavy machinery through.

The project in mountainous Taining county in Fujian province is an extension of the Chitan hydropower station, an affiliate of state-owned Huadian Fuxin Energy Ltd., and was expected to begin operations in August 2017, Xinhua reported.

An official at the county department, who gave only his surname, Wei, said by phone that the cause of the landslide was still unclear, but that the area had seen rainfall in the past few days.

Heavy rain has affected much of southern China since Wednesday, triggering floods and landslides, disrupting transport, and destroying crops.

Among the areas hardest hit was the popular tourist destination of Yangshuo in the Guangxi region, famed for its soaring karst outcroppings and dramatic scenery along the Lijiang River. CCTV showed widespread destruction to the town as well as outlying tourist attractions. Thousands of tourists and residents have been evacuated but no deaths were reported.

In Hubei province to the north, a 75-year-old woman and her 3-year-old great-grandson were washed away in an overflowing river, Xinhua reported. In nearby Guizhou province, once person dead and one missing after rains collapsed the roof of a building, Xinhua said.