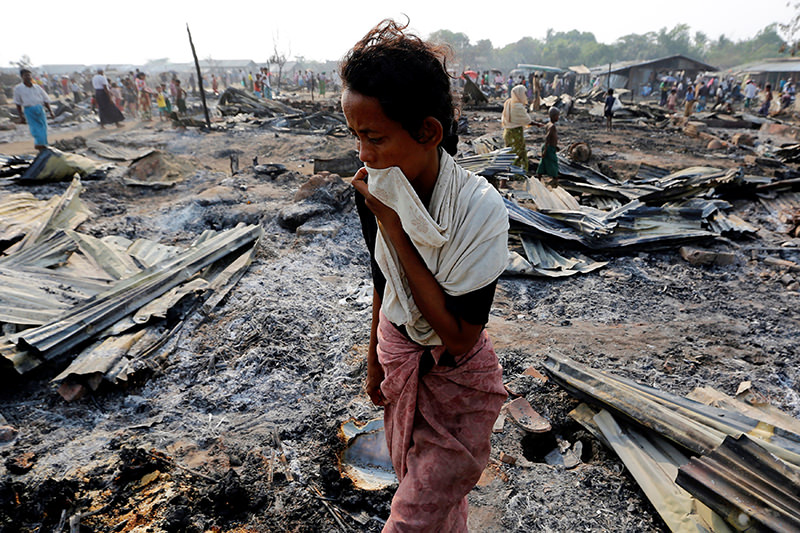 A woman walks among debris after fire destroyed shelters at a camp for internally displaced Rohingya Muslims in the western Rakhine State near Sittwe. (REUTERS Photo)
by May 10, 2016 12:00 am

A senior UN official on Tuesday accused Myanmar's government of allowing discrimination to continue against the country's Rohingya Muslim community and warned that it could lead to genocide.

"It was our hope that the new administration in Myanmar will address the issue of discrimination against the Rohingya who are Muslim. Instead, they have continued to be denied their identity," said Adama Dieng, a special advisor to the UN secretary general on the prevention of genocide.

"If it is not halted, it could lead to a genocide," he told dpa in Addis Ababa, where he was attending a UN-sponsored meeting on the role of African religious leaders in preventing violence and extremism.

The Rohingya are a minority Muslim group in predominantly Buddhist Myanmar. The government does not consider them to be a native ethnic group but illegal Bengali immigrants, stripping them of their citizenship and property.

Dieng urged Myanmar's State Counsellor Aung San Suu Kyi to use her moral authority to prevent discrimination against the Rohingya.

"Suu Kyi has asked the new US ambassador in Myanmar not to use the [name] Rohingya. This means the discrimination that this minority group faced for so many decades has continued," Dieng said.

Although Suu Kyi has been hailed for her pro-democracy activism in the past, she has recently come under criticism over the situation of the Rohingya, who number more than a million.