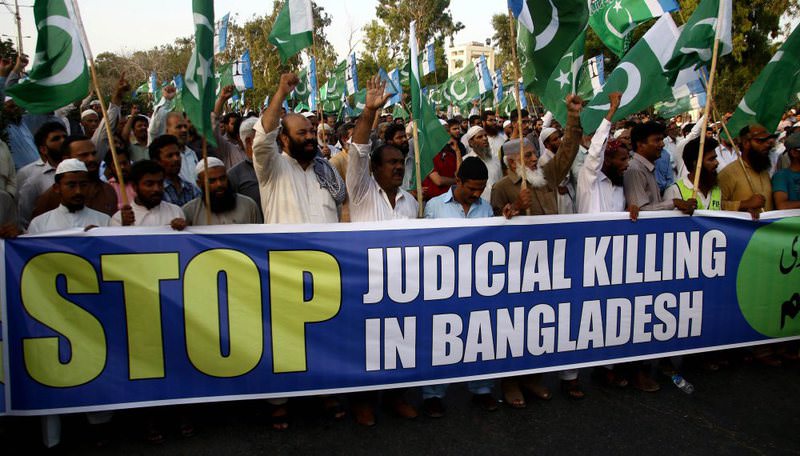 Student supporters of the Jamaat-e-Islami hold a banner during a protest in Karachi, Pakistan on May 11. (EPA Photo)
by Compiled from Wire Services May 13, 2016 12:00 am

The execution of Jamaat-e Islami leader Nizami drew an angry reaction from supporters and caused nationwide protests. Meanwhile, Turkey recalled its ambassador to Bangladesh for consultations after strongly protesting the execution

Bangladesh deployed thousands of police units in the capital on Thursday to prevent violence after the Jamaat-e-Islami called a nationwide strike in protest of its leader's execution. Jamaat-e-Islami President Motiur Rahman Nizami was hanged late on Tuesday following his conviction for the massacres of intellectuals during Bangladesh's 1971 war of independence from Pakistan.

Clashes erupted in the northwest and the south of the country on Wednesday, with police firing rubber bullets at people protesting against the 73-year-old's execution, officers said. Jamaat-e-Islami called for a 24-hour shutdown of Bangladesh, but shops and other businesses were open in the capital, Dhaka, and police officials reported no protests in the capital or in Nizami's hometown of Pabna in the northwest. "Life is normal in the capital. There is no sign of any protest," Dhaka Metropolitan Police spokesman Maruf Hossain Sorder told Agence France-Presse (AFP). "Still we're on alert. Several thousand policemen have been deployed in Dhaka, including in key places, to prevent any violence," Sorder said.

On Wednesday, the execution triggered violence in the northwestern city of Rajshahi where police fired rubber bullets to disperse some 500 Jamaat-e-Islami activists. Jamaat-e-Islami and ruling party supporters also clashed in Chittagong, where about 2,500 Jamaat-e-Islami supporters attended a service for the executed leader, the port city's deputy police chief, Masudul Hasan, told AFP. Security was tight across the country, with checkpoints erected on main roads in Dhaka to deter violence and thousands of police patrolling the capital. Security was also stepped up in Pabna, where his body was taken under armed escort for burial in his family's grave.

Nizami, a former government minister, was the fifth and most senior opposition figure executed since Hasina's government set up a controversial war crimes tribunal in 2010. Jamaat says the tribunal's trials are politically motivated aimed at eliminating its leadership, but the government maintains they are needed to heal the wounds of the war. DAESH and a Bangladesh branch of al-Qaida have claimed responsibility for several murders, but the government blames homegrown extremists and accuses the opposition of trying to destabilize the country. The Pakistani Foreign Ministry said Wednesday it was "deeply saddened" by the hanging.

Nizami's son Mohammad Nakibur Rahmen told Anadolu Agency (AA) on Wednesday that his father "asked all of us to remain patient" before being hanged.
RELATED TOPICS