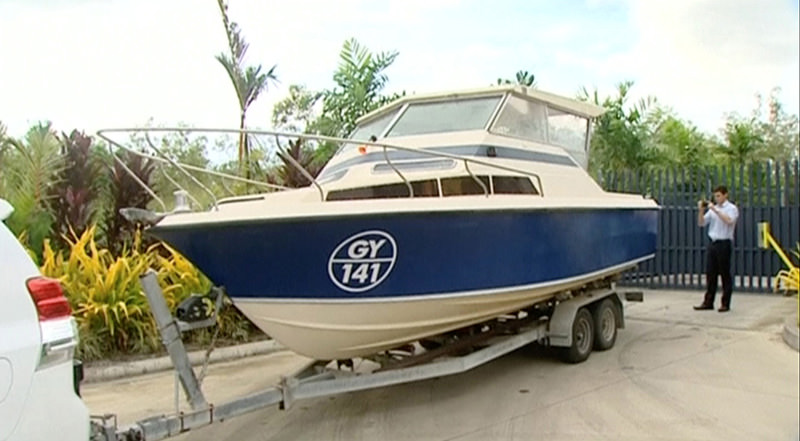 An officer takes pictures of a boat, which Australian police have seized in Cairns, Queensland, Australia in this still image taken from video, May 11, 2016 (Reuters Photo)
by Anadolu Agency May 15, 2016 12:00 am

Five men arrested on suspicion of attempting to sail a small boat to Indonesia were charged with "foreign incursion offences Sunday, on the suspicion that they were eventually trying to reach Syria to join Daesh.

The men, whose ages range between 21 and 31 years old, were each charged with one count of making preparations for incursions into foreign countries for the purpose of engaging in hostile activities.

Australia's Attorney-General George Brandis said in a statement Sunday that the five remained in custody, and will appear in court Monday morning, where an application will be made to extradite them to Victoria.

"The primary focus of the investigation has been to prevent the crime of foreign incursion. That is the crime that is committed when people travel from Australia to participate in a civil war or terrorist war fighting overseas, as it will be alleged these five men were preparing to do," he said.

"We will continue to thwart and frustrate threats and undermine terrorist acts, both on the Australian mainland and by Australians preparing to engage in such acts overseas, whenever they threaten to occur."

Brandis underlined that there was no current or impending threat of a terrorist act to the Australian community arising from the investigation.

"The fact that they'd gone all the way from Melbourne, all the way to far north Queensland, indicates that these people were extremely committed in ... their attempt to leave the country," Gaughan said.

Brandon confirmed Sunday that all five men's passports had previously been cancelled.

Among the five were Musa Cerantonio, who London-based think-tank the International Centre for the Study of Radicalisation has described as "an outspoken cheerleader for ISIS [Daesh]".

Others were Kadir Kaya, who told local radio in October that he hated Australia but could not leave due to his passport being revoked, and Shayden Thorne, the brother of Australian preacher Junaid Thorne -- who was sentenced to eight months in prison in August 2015 for flying under a false name.

Australia has been engaged in efforts to increase anti-terror measures in recent years.

The country passed legislation in December to strip dual nationals of their citizenship if they are convicted or suspected of terrorism offences.

It has already banned its citizens from traveling to Mosul and Syria's Raqqa province -- unless they have a "legitimate purpose" for being there.