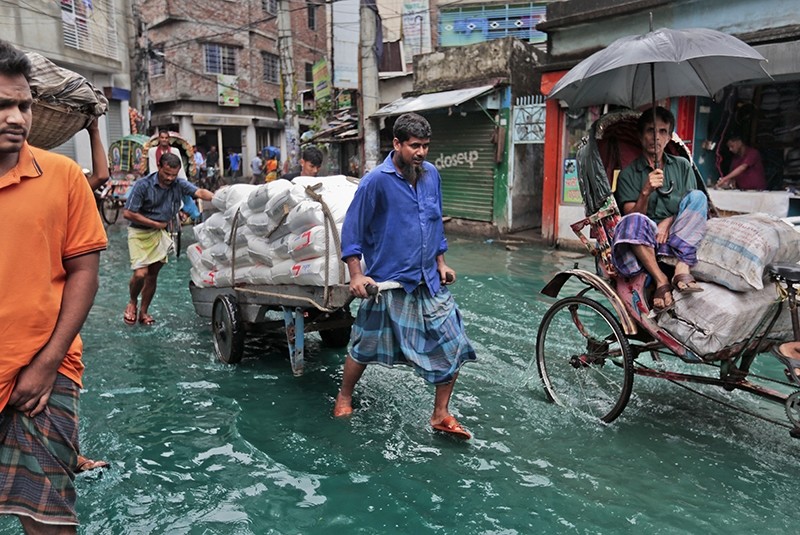 Bangladesh was hit by a cyclone on Saturday that unleashed heavy rain and strong winds on the southern coastal region, killing at least 24 people and forcing 500,000 from their homes

Thousands of Bangladeshis were left homeless on Sunday after Cyclone Roanu battered the impoverished southern coastal region, ripping apart flimsy houses and killing at least 24 people. The storm on Saturday ploughed through low-lying villages in the Chittagong and Barisal regions, where residents described seeing meters-high walls of water that caught some unaware. The cyclone damaged tens of thousands of mud-and-tin houses in the impoverished southern districts, with many low-lying villages inundated by a storm surge.

Authorities evacuated more than 500,000 people to shelters before the cyclone hit with winds of up to 88 kilometers per hour. They later weakened. But officials said thousands of others along the coast were left stranded in their homes as sea water ripped through dykes and flooded dozens of villages.

"Before we could realize, the whole village was washed away by a huge wall of water," said Abu Siddique, a councilor from Banshkhali district in Chittagong. "It came at least six hours early, giving the villagers no time to rush to cyclone shelters. Those who died were caught by a sudden rush of water," he told AFP.

"They [authorities] said the storm surge would be four-feet high but in some places the water that hit our shore was as high as 10 feet [three meters]." Bangladesh's disaster management chief said thousands of homes were damaged or destroyed and 24 people had been killed in total, up from 23 recorded on Saturday. About half of those who died were from the Chittagong region, which bore the brunt of the storm, Disaster Management Department head Reaz Ahmed told AFP.

"Some 80,000 tin-and-mud-built homes were damaged by the storm in the coastal regions including 23,000 homes that were completed knocked down," Ahmed said. Authorities were sending relief supplies including rice and other dry food to affected areas, where many poor residents already have very little and scratch a living as small fishermen or farmers.

Television footage showed villagers sitting helplessly in front of their flattened houses. "In a moment my home was destroyed," an unnamed villager in Bhola island off the Barisal coast told private Independent television.

Over 80 villages in Barisal were flooded after a rain-swollen dam burst and forced residents to flee, the Daily Star newspaper said on Sunday. Seawater gushed through shops and warehouses in the commercial hub and main port city of Chittagong, police and industry officials said. "Food supplies worth 1 billion taka ($12.5 million) were damaged after seawater entered our warehouses," Chittagong Chamber of Commerce and Industry President Mahbubul Alam told AFP. A week of extreme weather had wreaked havoc across South Asia, with Sri Lanka battered by the heaviest rains in a quarter of a century, which triggered severe floods and landslides.

Bangladesh is regularly battered by such cyclones that form in the Bay of Bengal. Cyclone Aila in 2009 killed 300 people while Cyclone Sidra claimed 4,000 lives in 2007. Earlier this month lightning strikes killed an unprecedented 59 people in Bangladesh in three days as tropical thunderstorms hit the country before the annual monsoon, which runs from June to September.

Floodwaters were receding in the capital Colombo after the heaviest rains in 25 years pounded the country since last weekend, triggering landslides that have buried victims in tons of mud. Soldiers and other rescuers have discovered 15 bodies in the last 24 hours in the worst-hit district of Kegalle, about 100 kilometers northeast of Colombo, where two villages were destroyed last week.

Eighty-four people are known to have died across the island amid fears the number could rise, with 116 people still listed as missing, the Disaster Management Center (DMC) said in its latest update. "The search will continue for some more time even though we have not found anyone alive during these search operations," DMC spokesman Pradeep Kodippili said of the landslides where 50 bodies in total have been found. Sri Lanka was receiving international aid for more than half a million people forced to flee their homes across the island.