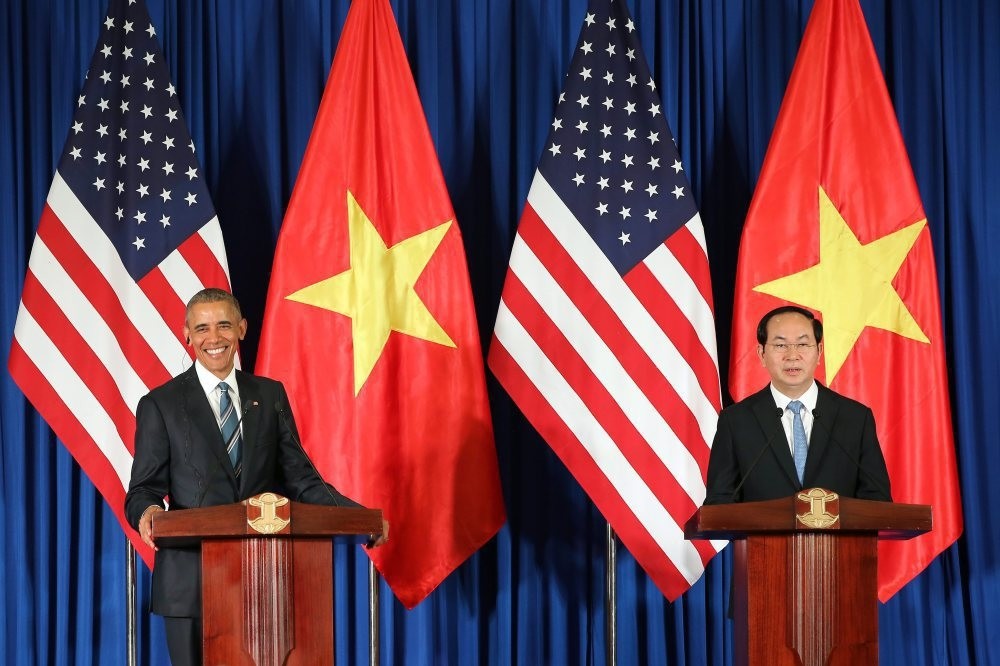 U.S. President Barack Obama (L) and Vietnamese President Tran Dai Quang (R) at a press conference at the International Convention Center in Hanoi, Vietnam, on May 23.
by Associated Press May 24, 2016 12:00 am

U.S. President Obama scrapped a Cold War-era ban on weapons sales to Vietnam Monday as ties between the former foes grow closer thanks to mutual fears of Chinese expansion in disputed seas

U.S. President Barack Obama Monday lifted a half-century-old ban on selling arms to Vietnam, looking to bolster a government seen as a crucial, though flawed partner in a region that he has tried to place at the center of his foreign policy legacy.

Obama announced the full removal of the embargo at a news conference where he vowed to leave behind the troubled history between the former war enemies and embrace a new era with a young, increasingly prosperous nation. Obama steered clear of harsh condemnation of what critics see as Vietnam's abysmal treatment of dissidents, describing instead modest progress on rights in the one-party state.

"At this stage, both sides have established a level of trust and cooperation, including between our militaries, that is reflective of common interests and mutual respect," Obama said. "This change will ensure that Vietnam has access to the equipment it needs to defend itself and removes a lingering vestige of the Cold War."

Obama also had more current motivations. His move was the latest step in a yearslong effort to counter China's influence in Asia. Obama's push to deepen defense ties with a neighbor was certain to be eyed with suspicion in Beijing, which has bristled at U.S. engagement in the region and warned officials not to take sides in the heated territorial disputes in the South China Sea. Obama claimed the move had nothing to do with China, but made clear the U.S. was aligned with the smaller nations like Vietnam. The United States and Vietnam had mutual concerns about maritime issues and the importance of maintaining freedom of navigation in the South China Sea, he said.

China outwardly lauded the lifting of a U.S. arms embargo, saying it hoped "normal and friendly" relations between the U.S. and Vietnam are conducive to regional stability. A spokeswoman for the Chinese Foreign Ministry said bans are a product of the Cold War and shouldn't have existed.

It was unclear whether striking the ban would quickly result in a boost in arms sales. Obama said that each deal would be reviewed case by case and evaluated based on the equipment's potential use. But there would no longer be a ban based on "ideological division," he said.

Vietnamese President Tran Dai Quang embraced the chance to enter a new era in U.S-Vietnamese relations. He praised the expansion in security and trade ties between "former enemies turned friends" and, standing next to Obama before reporters, called for more U.S. investment.

Ahead of the visit, in what was seen as a goodwill gesture, Vietnam granted early release from prison to a prominent dissident Catholic priest.

Obama's arrival in Hanoi late Sunday made him the third sitting president to visit the country since the end of the war. The trip comes four decades after the fall of Saigon, now called Ho Chi Minh City, and two decades after President Bill Clinton restored relations with the nation. Obama also made the case for stronger commercial and economic ties, including approval of the 12-nation Trans-Pacific Partnership trade agreement that is stalled in Congress and facing strong opposition from the 2016 presidential candidates. The deal, which includes Vietnam, would tear down trade barriers and encourage investment between the countries that signed it.

Critics worry it would cost jobs by exposing American workers to low-wage competition from countries such as Vietnam.

Obama's agenda also included separate meetings with prime minister, Nguyen Xuan Phuc, and Communist Party General Secretary, Nguyen Phu Trong. At a luncheon for officials, the president offered thanks for all who came before to "help our nations reconcile." He singled out U.S. Secretary of State John Kerry, who served in the Vietnam War, for special mention. He said veterans on both sides had showed "hearts can change and peace is possible."
Last Update: May 24, 2016 1:40 am
RELATED TOPICS