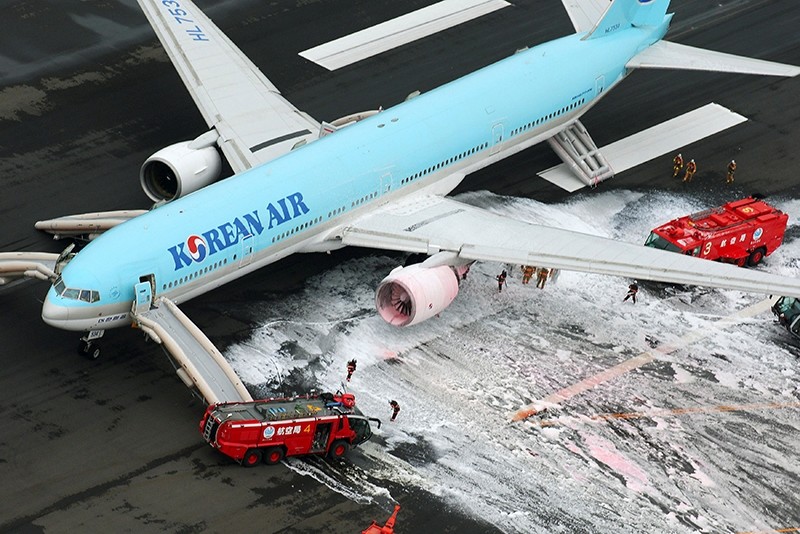 An aerial picture shows firefighters spraying foam at the engine of a Korean Air Lines plane after smoke rose from it at Haneda airport in Tokyo, Japan, May 27, 2016. (Kyodo Photo via Reuters)
by May 27, 2016 12:00 am

About 300 passengers and crew members were evacuated from a Korean Air Boeing 777 at Tokyo's Haneda airport in dramatic scenes after one of the engines caught fire, officials said Friday.

TV footage from the airport showed the plane, which was bound for South Korea's Gimpo International, surrounded by red fire trucks and with the area around its left wing doused in foam. The plane's inflatable emergency evacuation slides had all been deployed.

"The plane bound to Kimpo (Gimpo) Airport from Haneda had 302 passengers and 17 crew members on board. (The) fire was apparently put out."

Smoke was seen coming from the plane as it was about to take off at around 00:40 pm (0340 GMT), officials of the Japanese transportation ministry and the airport told AFP.

Passengers and crew were evacuated and there were no reported serious injuries, a fire department official said.

"So far we know that 19 people were (lightly) injured, some of whom said they feel ill," he told AFP.

Dozens of fire engines were deployed to the scene and have almost put out the fire, he said.

Local media said police have so far discovered no information linked to criminality and reported that the airport, which was closed temporarily, would resume operations on three out of four runways.

The accident affected the travel plans of some 50,000 passengers, causing the cancellation of at least 200 flights, NHK reported.