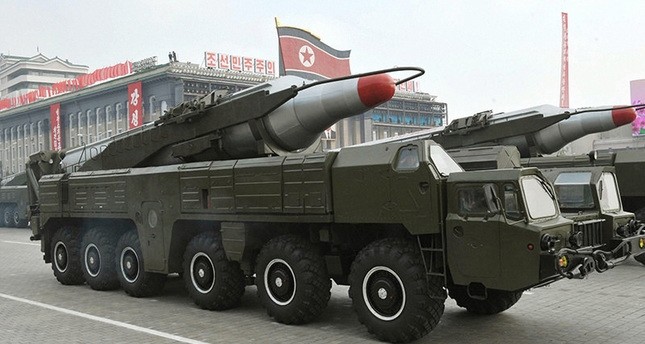 A file photo dated October 2010 and made available by the North Korean Central News Agency (KCNA) shows a 'Musudan' missile displayed during a military parade marking the 65th anniversary of the foundation of the Workers' Party of Korea (EPA Photo)
by Anadolu Agency
Jun 01, 2016 12:00 am

North Korea tried to test-fire an intermediate-range ballistic missile Tuesday, after weeks of appearing to place a greater priority on talks than testing weapons -- although South Korea's Joint Chiefs of Staff (JCS) swiftly dismissed the launch as a failure.

The projectile in question was reported by local media as a Musudan missile, the same model that the North tested for the first time last month -- resulting in three failures.

"North Korea attempted to launch an unidentified missile from Wonsan, Gangwon Province, at around 5:20 a.m., but it is presumed to have been unsuccessful," read a statement from the South's JCS, which had already been on alert following reports Monday that a missile launch north of the border was imminent.

South Korean news agency Yonhap cited "official sources" when claiming that the latest Musudan test may have failed because the missile exploded as it was being fired from its launcher -- potentially causing life-threatening injuries to anyone nearby.

Meanwhile, a JCS spokesperson told reporters in the South that the "the military is keeping open the possibility that the North will conduct additional provocations."

There had been intense speculation that Pyongyang might carry out a nuclear or missile test in line with this month's landmark party congress in the North Korean capital.

Despite South Korean intelligence pointing to a significant provocation around the May 6-9 congress, the North kept the world waiting -- and instead switched to proposals for dialogue.

Seoul has so far rejected those calls, favoring instead newly strengthened United Nations sanctions as the best "prescription" for dealing with North Korea's nuclear weapon ambitions.

In Washington, the White House strongly condemned the missile test while emphasizing the impacts of the economic penalties.

"As a result of North Korea's insistence on pursuing this approach, the North Korean government has been increasingly isolated and they're under increasing pressure economically as a result of the coordinated actions of the international community," spokesman Josh Earnest said.

Pyongyang is barred from nuclear and ballistic missile tests under numerous U.N. resolutions.