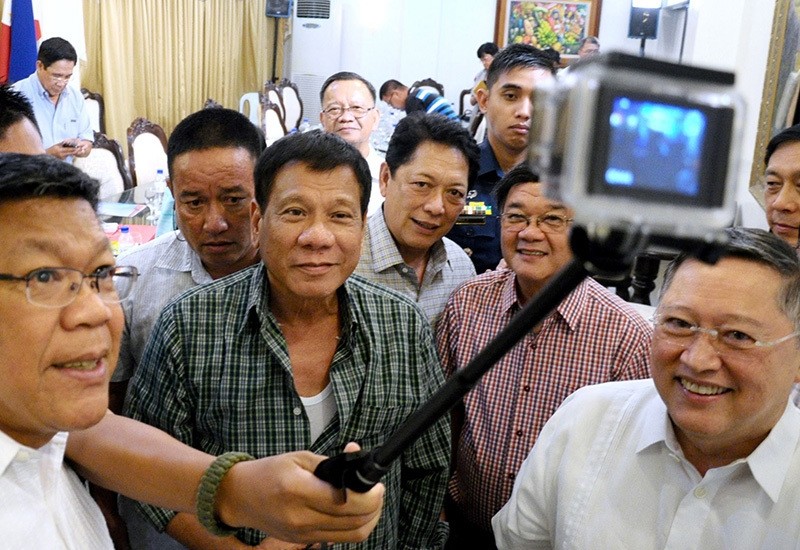 Philippines' President-elect Rodrigo Duterte (C) takes a selfie with Cabinet members during a press conference in the southern Philippine city of Davao on May 31, 2016 (AFP)
by Anadolu Agency Jun 02, 2016 12:00 am

A spokesperson for Philippine President-elect Rodrigo Duterte insisted Thursday that he will not apologize for comments implying that many journalists killed in the country had been corrupt.

"You only apologize if you committed something wrong," Panelo said.

During a press conference Tuesday, Duterte responded to a question about the spate of killings of journalists in the Philippines -- ranked among the deadliest countries for media -- by claiming that many of those slain had been corrupt.

"Just because you're a journalist, you are not exempted from assassination if you're a son of a b****," he said.

The response has been slammed by both local and international journalist associations.

France-based Reporters Without Borders (RSF) expressed outrage over the comments that "corrupt journalists are legitimate murder targets", calling on Philippine media to boycott future press conferences by Duterte until he issues a formal, public apology.

"Not only are these statements unworthy of a president but they could also be regarded as violations of the law on defamation or even the law on inciting hatred and violence," Benjamin Ismail, head of its Asia-Pacific desk, said in a statement Wednesday.

The National Union of Journalists of the Philippines described Duterte's alleged attempt to "justify the murder of journalists in the country by playing the corruption card" as "appalling".

"Mr. Duterte's crass pronouncement not only sullies the names and memories of all 176 of our colleagues who have been murdered since 1986, he has also, in effect, declared open season to silence the media, both individual journalists and the institution, on the mere perception of corruption," it said in a statement.

While recognizing that corruption "is among the most pressing problems faced by the media" and that some reporters were killed due to private disputes, it stressed "the data shows that, of the handful of media killings that have actually made it to the courts, the accused are invariably from government -- elected officials, government executives or members of the security services -- and invariably accused of corruption."

Duterte won the May 9 election on a crime-fighting campaign, and is set to be inaugurated June 30.

After his victory, he vowed to work toward re-imposing the death penalty and offered a bounty to officers who capture drug dealers "dead or alive".

In his 22 years as mayor of Davao City, a bustling commercial hub in southern Mindanao island, he imposed bans on public smoking, and the selling of alcohol and the operation of entertainment spots past midnight.

In its 2016 World Press Freedom Index, RSF ranked the Philippines 138th out of 180 countries.

An attack considered the single deadliest event for journalists in history occurred in the Philippines in 2009, when assailants in southern Maguindanao province killed 58 people -- among them 34 reporters -- headed to file a certificate of candidacy for a local mayor.