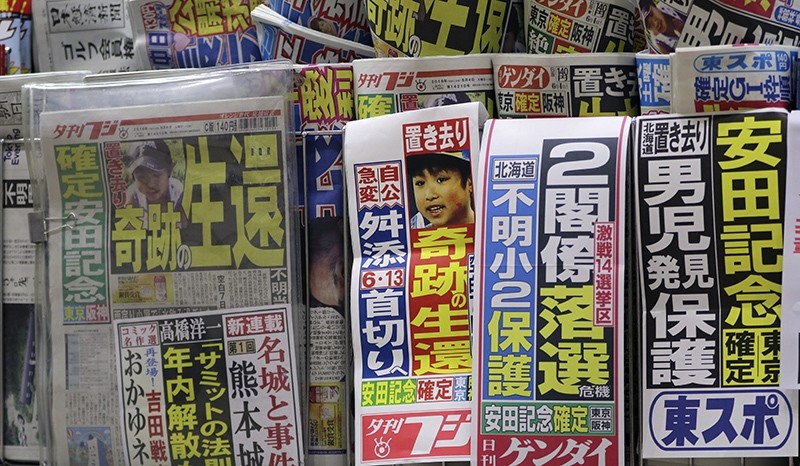 An image of Yamato Tanooka, the missing 7-year-old Japanese boy, is displayed by Japanese newspaper Yukan Fuji being sold at a railway station kiosk in Tokyo (AP Photo)
by Jun 06, 2016 12:00 am

The father of a seven-year-old Japanese boy found alive nearly a week after his parents left him in a bear-inhabited forest as punishment said that his son has forgiven him, as details emerged of the boy's ordeal.

Japan has been mesmerised by young Yamato Tanooka, who survived six nights alone in northern Japan after his angry parents abandoned him by the side of a mountain road on the island of Hokkaido on May 28.

Searchers, including soldiers, scoured the mountain for days but could find no clues to the missing boy. He was discovered Friday morning sheltering in a hut on a military base some 5.5 kilometres (3.4 miles) from where he had been left.

Takayuki Tanooka, his 44-year-old father, has said that he, his wife and daughter returned to the spot where Yamato was forced out of the family car several minutes later, but there was no sight of the boy.

"I said to him, 'Dad made you go though such a hard time. I am sorry'," the elder Tanooka told broadcaster TBS in footage aired Monday.

"And then, my son said, 'You are a good dad. I forgive you'," Tanooka added, choking up.

Yamato was taken to hospital immediately after being found by a soldier from the base and will be discharged on Tuesday, a hospital official told AFP, refraining from giving further details.

Immediately after being abandoned, the crying boy had attempted to chase his parents' car but ended up getting disoriented and going the opposite way, the Mainichi Shimbun newspaper reported, citing sources close to the family.

Yamato also said that because he was afraid of the forest he walked about five hours in the dark along a path until he came to the hut on a military drill field, the report added.

Other reports said the boy saw no one until the soldier found him on Friday but he believed his family must be looking for him.

Yamato's parents have been severely criticised for forcing him out of their car to teach him a lesson for throwing stones at cars and people.

The elder Tanooka said he was angry because the boy had recently been scolded at school for hitting cars with a wooden stick.

"So I tried to show him that I can be scary if seriously angry," he said, citing what he described as a "father's dignity".

The contrite 44-year-old father bowed and apologised in front of reporters on Friday after being reunited with Yamato for what he admitted were his "excessive" actions.

The parents originally told police their son got lost while on a family outing to gather wild vegetables. Tanooka said they lied at first because they feared the reaction of society and possibly being questioned by police as abusive parents.

Local police have reported the case to a child welfare centre as possible mental abuse, the Hokkaido Shimbun newspaper and other reports said Monday.