Group of Cambodian Muslims among 'smashed' by Khmer Rouge 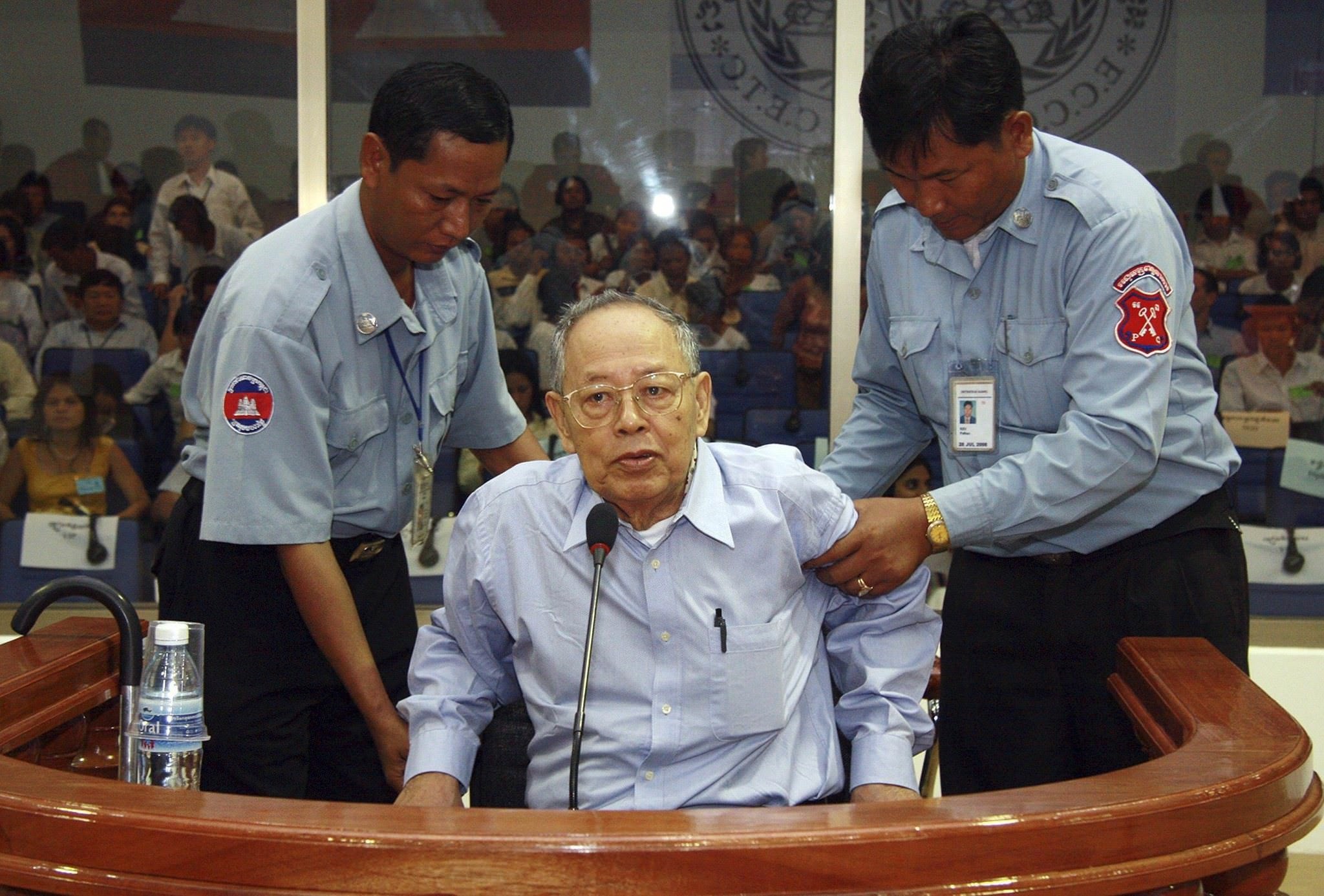 Former Khmer Rouge foreign minister Ieng Sary is assisted during his pre-trial hearing at the Extraordinary Chambers in the Courts of Cambodia (ECCC) in the outskirts of Phnom Penh in this June 30, 2008 file photo. (Reuters Photo)
by Anadolu Agency Jun 08, 2016 12:00 am

Kaing Guek Eav, chairman of the Khmer Rouge's most notorious prison, told the Khmer Rouge tribunal Wednesday of a group of Muslims who were "smashed" at the site in the Cambodian capital in the 1970s.

The 73-year-old jailer, better known by his alias Duch, is serving life in prison for his role as a deputy, then as chairman, of S-21 -- where tens of thousands of people were killed by the Khmer Rouge.

The court is hearing the second phase of a mammoth case against co-defendants Nuon Chea and Khieu Samphan -- the "Brother Number 2" and former head of state, respectively, for the Khmer Rouge.

This phase is focusing on charges of genocide and internal purges, for which S-21 is considered to have been a key crime site.

Wednesday marked Duch's second day on the witness stand and questioning continued by senior assistant prosecutor Dale Lysak -- who sought to gain answers about the systematic executions of men, women and children who ended up in the prison.

Duch told the court of one group of people who had been written down in one of the thousands of execution lists, and whose nationalities included people from Pakistan.

"If I'm not mistaken, those Muslim people were finally smashed at S-21 -- a former high school -- after they had been evacuated to various locations," Duch said.

"By that time I wasn't yet chief. They were held at Takhmao prison and later smashed."

Smashing was a term often used by the Khmer Rouge to describe the practice of executing undesirables or its own cadre who were believed to have betrayed the cause.

Dale Lysak was keen to press the issue of the extermination of children, which documents show were taken to the prison along with their parents.

"I believe they applied the same principles [with the Muslim prisoners]. When the parents were considered traitors, the children would be smashed as well."

He added that exterminating entire families was "a practice in principle regarding policy of the [Communist Party of Kampuchea] toward Muslim people."

Duch recalled this action having been taken after a telegram was sent to Khmer Rouge leader Pol Pot about Muslim people in Cambodia in November 1975 -- just seven months after the ultra-Maoist leader took hold of the country.

The exhaustive lists that show the extent of the killing are the best indicators as to how little the regime's leaders cared for human life, no matter the age.

At Wednesday's hearing, people were told about lists of pregnant women -- eight of them nearly full-term -- who were executed.

Lists of families were included: In one case, a young girl hung herself after her other sisters were taken away to Choeung Ek, otherwise known as The Killing Fields.

Other siblings and her mother were killed shortly after that, while her father was interrogated for the next nine months at the prison before he too was murdered.

The purges included some of the most high-ranking people in the regime; Central Committee members Vorn Vet and his family were wiped out. Duch said Vet's arrest made him scared that he could be next.

"After the instruction to smash everyone at S-21, I became so desperate and fatigued that I couldn't do anything," he alleged. "The screening… had an impact on everyone, including myself."