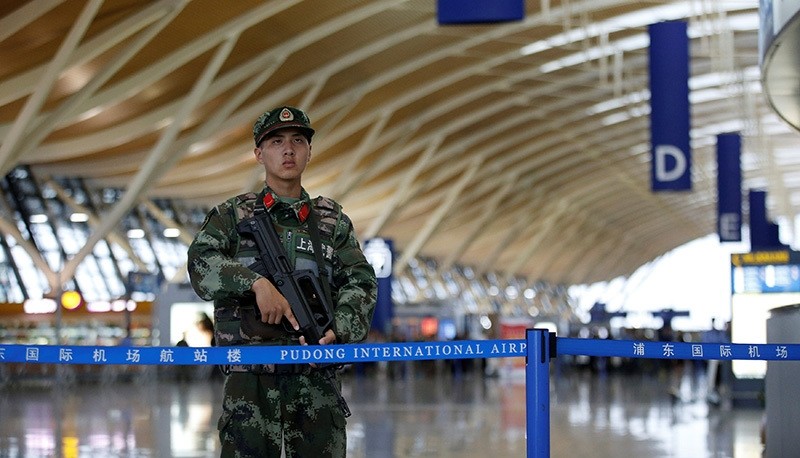 A blast caused by "home-made" explosives injured four people and sparked a major security alert at the main international airport in China's commercial hub of Shanghai on Sunday, according to the operator and state media.

The blast at Pudong Airport occurred near the check-in counter of Terminal Two in mid-afternoon, according to a statement on the official microblog of the Shanghai Airport Authority.

The official Xinhua news agency, citing authorities, said a "home-made explosive" blew up and hurt four people including one who suffered from self-inflicted injuries -- suggesting he set off the device.

The other injured included a man from the Philippines, as well as a 67-year-old man and a 64-year-old woman -- both described as Chinese, Xinhua reported.

The agency earlier reported that the blast was caused by fireworks.

The Xinmin Evening News said there were two explosions within five seconds. They originated from two pieces of luggage placed about 15 metres (49 feet) apart, the local newspaper said.

Online video clips showed dense grey smoke rising to the ceiling of the cavernous terminal, and paramilitary security forces rushing into the building immediately after the incident.

Photos posted online by those claiming to be witnesses showed police keeping people back from the scene and abandoned luggage littering the floor.

The incident came as people returned home after a public holiday and just days before Thursday's opening of a Disney theme park in Shanghai.

There have been several cases in China of disgruntled individuals setting off explosions or starting fires in revenge for perceived wrongs.

In 2013 a wheelchair-bound man from southern China detonated a homemade bomb at Beijing international airport in a protest at alleged police brutality.

The man, Ji Zhongxing, was later sentenced to six years in jail.

Last year an unemployed man set off an explosion at a public park in the eastern province of Shandong, killing himself and another person and wounding 24.