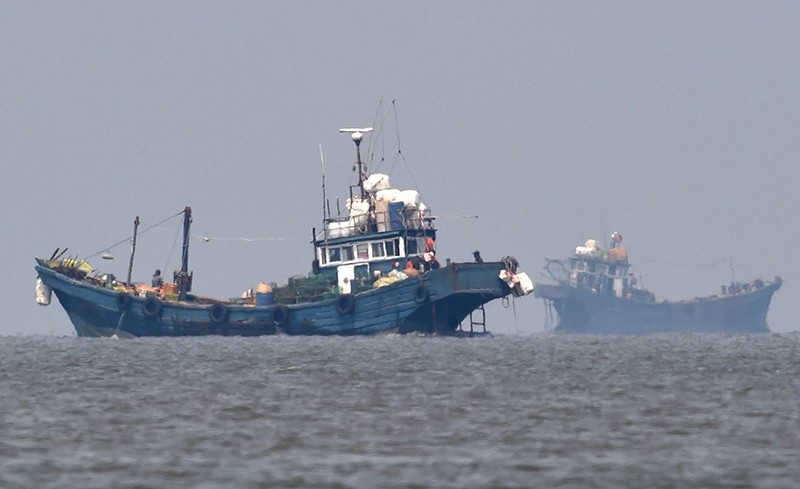 A handout picture made available by the by South Korean Defense Ministry, shows Chinese illegal fishing boats are seen in neutral waters near the inter-Korean, At Sea (EPA Photo)
by Anadolu Agency Jun 16, 2016 12:00 am

Seoul's defense ministry declared Thursday that Chinese boats have once again been driven out of neutral waters between the Koreas, six days after launching an unprecedented military operation with the United Nations Command (UNC) to protect the Han River estuary's rich marine resources from illegal fishing.

"Currently, there are no Chinese boats in the neutral waters in the estuary area," a ministry spokesperson told reporters.

Last weekend nearly a dozen vessels from China escaped to North Korean waters, where they appeared to find relative safety-but there were again signs of trespassing fishermen back in the estuary from Monday night.

The North itself has stayed out of the South Korean-UNC operation, the first of its kind since the 1950-53 Korean War, and limited to four patrol boats under armistice agreement terms-the western sea border area is one of the region's most tense hotspots, having witnessed numerous deadly confrontations between the Koreas during the post-war era.

The issue of illegal fishing has become an added concern for Seoul, which reported more than 500 sightings of Chinese boats acting illegally between January and May alone.

While Beijing takes the matter seriously at an official level, China's foreign ministry called on Seoul and the UNC this week to "protect the legitimate rights of Chinese fishermen".

South Korea's Coast Guard has been questioning 14 crew members who were captured along with two Chinese vessels Tuesday, the only tangible outcome of the crackdown so far.

Beijing has also denied knowledge of claims that North Korea may have sold fishing rights to fishermen in China.

Seoul's defense ministry said the military is "ready" to carry on as needed, while a separate three-day exercise involving 20 warships in South Korean waters but near the so-called Northern Limit Line got underway Thursday.

"We are keeping full combat readiness to swiftly respond to the enemy's possible provocations in waters off the west coast," read a statement from the South's Navy.