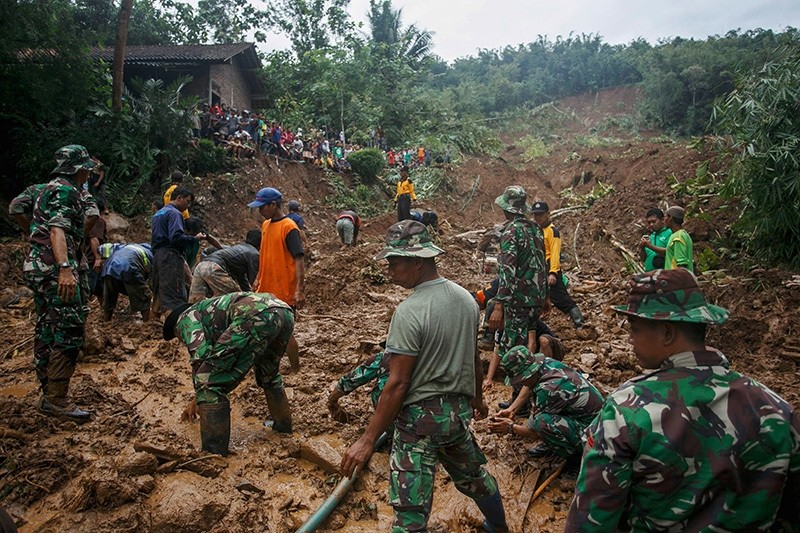 Flash floods and landslides in central Indonesia have killed at least 35 people and destroyed dozens of homes, an official said Sunday, as searchers scoured devastated villages for survivors.

Dozens were also missing or injured following torrential rain and widespread flooding on the main island of Java, where thousands of homes have been swamped.

Areas prone to landslides across densely-populated Central Java province have been worst hit, with drivers swept off roads and dozens of homes completely destroyed by fast-moving walls of mud, rock and water.

TV footage showed villagers sitting on rooftops to escape the rising water, their cars and homes submerged in brown water.

The worst-hit area was Purworejo district on Java's south coast, where 19 people were killed, he said.

In one incident in the district, nine people died as they tried to clear rubble from a blocked road.

"Suddenly a huge landslide struck the cars and people on the street. Nine bodies were retrieved," Sutopo said.

In Banjarnegara, where six people were killed in an avalanche of mud, residents were bracing for the prospect of further floods. Emergency crews were trying to clear roads of felled trees and rocks dumped by huge landslides, an AFP journalist at the scene said.

Heavy lifting equipment was being used in the hunt for survivors in Purworejo but access to sites elsewhere was difficult, said Sutopo.

Hundreds of rescuers were being forced to shift debris with their bare hands in some areas.

Evacuation centres, equipped with temporary shelters and kitchens, have been erected near the disaster zones.

Sutopo said late Sunday that much of the flooding had subsided but he warned people to stay on alert as heavy rains could continue into the next day.

Landslides are not uncommon in Indonesia, a vast tropical archipelago prone to natural disasters and torrential downpours.

Last month 15 students holidaying at a popular tourist spot in western Indonesia were killed when a landslide swept through their camp ground.