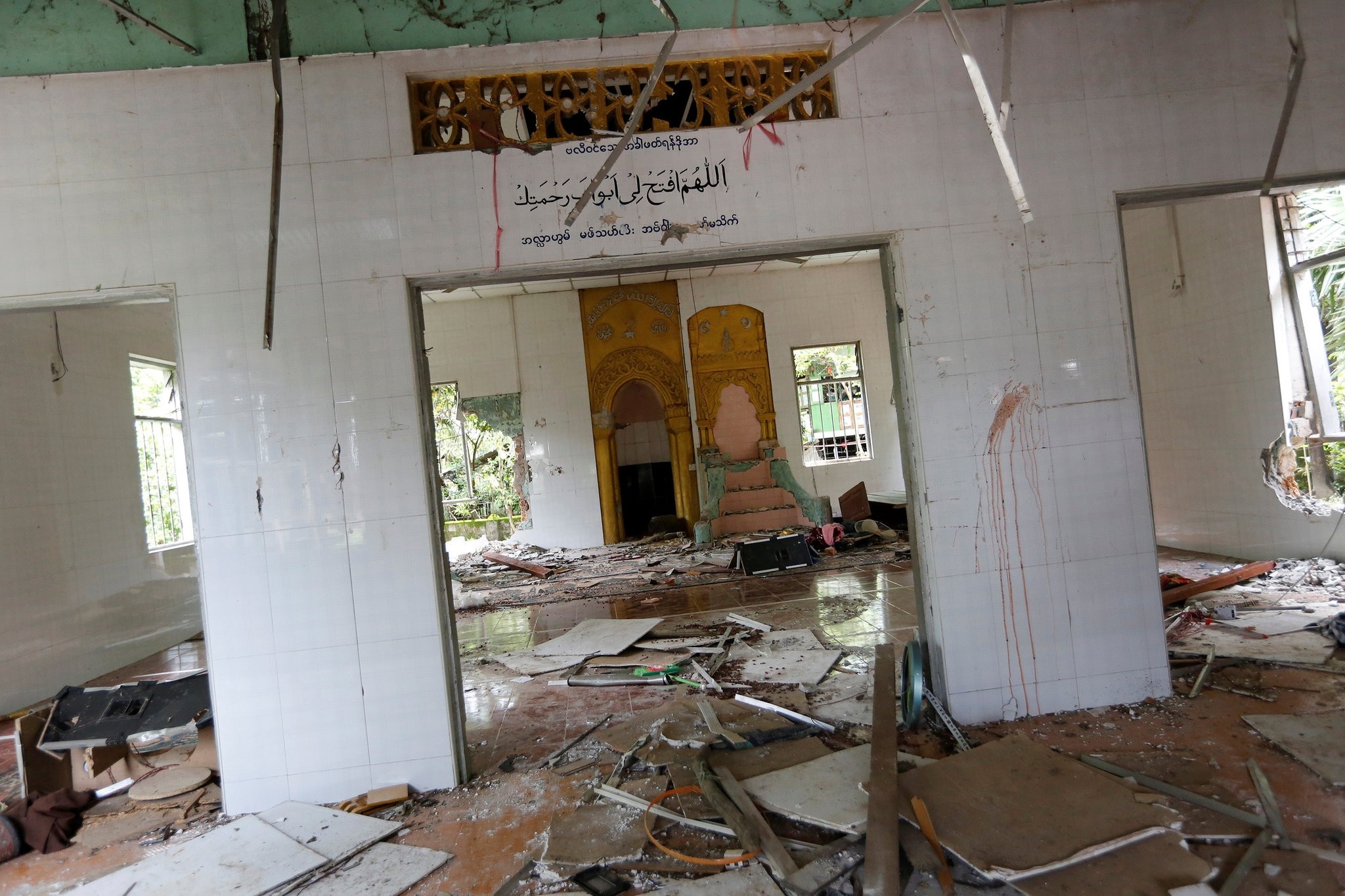 The interior of a destroyed mosque is seen after a group of men attack it in the first serious outburst of inter-religious violence in months in the village of Thayethamin outside Yangon, Myanmar June 24, 2016. (Reuters Photo)
by Anadolu Agency Jun 24, 2016 12:00 am

Authorities in southern Myanmar are appealing for calm Friday, the day after hundreds of angry villagers destroyed Muslim landmarks and attacked a Muslim man following an argument over the construction of a religious school.

By late evening, police had restored order to a village in Bago Region, aware that similar incidents between Muslim and Buddhists in the country's recent past have led to the death and displacement of hundreds of people.

"The situation is now under control," he said, of the area in which just 50 of the 1,029 households are Muslim.

Ohn Lwin added that around 70 Muslim villagers, mostly children and women, had been forced to take refuge overnight at the police outpost in the village in fear of the mob.

The violence is understood to have started after an argument between Muslim resident Abdul Sharif and two female Buddhist neighbors. Before police could remove Sharif for his own safety, he had been attacked by a villager, according to local police.

Ohn Lwin said that village elders and monks were unable to control what soon turned into a volatile situation.

Before additional security could arrive, a rampaging mob destroyed a mosque, a religious school in the mosque compound and a building under construction that local Buddhists saw as an unauthorized Islamic school.

Authorities have said that no arrests have been made.

"We are taking great care in how we handle this case," said Ohn Lwin.

The violence left 200 dead and displaced thousands, and eventually spread to other areas of the country such as Mandalay.

Late Friday, local Muslim resident Khin Oo -- a member of the mosque's caretaker committee -- said the attacks were not down to communal tensions, but rather a personal dispute that escalated dramatically.

"You can't say it is because of religion. The problem is about between him [Sharif] and his neighbors," he told Anadolu Agency.

One of two women engaged in the argument with Sharif has said that he insulted other people, and had made disparaging remarks about a meditation center that opened in the village's monastery.

She claimed that Sharif had personally attacked Buddhists for reporting the "illegal" construction of the religious school building to authorities.

"He is haughty and shows no respect for other religions," she claimed.

Abdul Sharif's father, meanwhile, has said that the problem stemmed from business.

"As my son gets more and more customers to his shop, rivals are getting jealous on him," Myo Swe said.

"I believe this led to the attack."