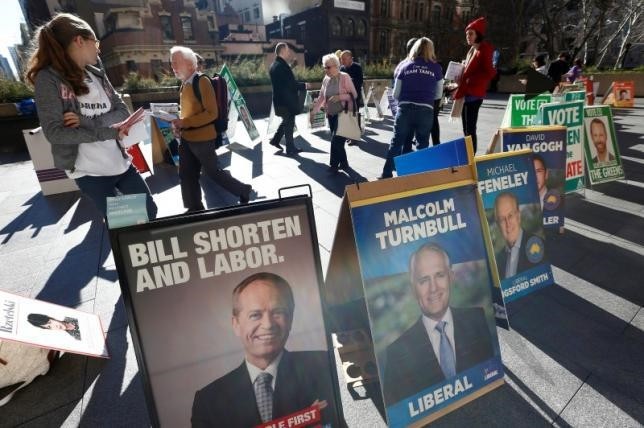 The declaration ended days of uncertainty about the new government's identity, after a tight race between the two major parties left neither of them with the 76 or more seats required for a parliamentary majority following polls on July 2.

"We've won the election, that's what we've done," Turnbull told reporters in Sydney, adding that he received a call from Labor leader Bill Shorten congratulating him on his re-election as prime minister.

Turnbull's ruling Liberal/National coalition is currently expected to secure 74 seats, and potentially two more, in the 150-seat House of Representatives, according to national broadcaster ABC's projections.

But the Australian leader has won the support of three independent MPs on budget matters and on votes of no confidence, paving the way for him to form a minority government if necessary.

Labor has won 66, and with five independents elected, the opposition does not have sufficient seats to govern in Canberra, according to the projections.

Shorten pledged earlier Sunday in his concession speech that his centre-left party wanted to work well with the government, amid concerns the close result and higher number of minor party and independent lawmakers in parliament could cause gridlock.

Turnbull welcomed his comments and said it was "vital this parliament works" to tackle the challenges Australia faces, including a rocky transition away from a dependence on mining-driven growth.

"Every member of the House and the Senate deserves respect because they have been elected by the Australian people."

The two seats the coalition hopes to pick up are among five in the balance, with the electoral commission still completing the painstaking task of counting postal votes and others cast outside people's normal electorates.

Both Turnbull and Shorten said they supported an inquiry into electronic voting, amid the protracted counting process.

"I have been an advocate of electronic voting for a long time... yes, this is something we must look at," Turnbull said.

Shorten added earlier: "I will be writing to Mr Turnbull and saying, 'really, we're a grown-up democracy, it shouldn't be taking eight days to find out who's won and who's lost'."

Turnbull lost the government's comfortable majority in the House of Representatives in last Saturday's election after his campaign on "jobs and growth" and "innovation" failed to resonate equally across the vast island continent.

Australia's politics has been turbulent in recent years, with a "revolving door" of prime ministers in charge. Four different leaders have served since 2013 as parties removed sitting prime ministers.