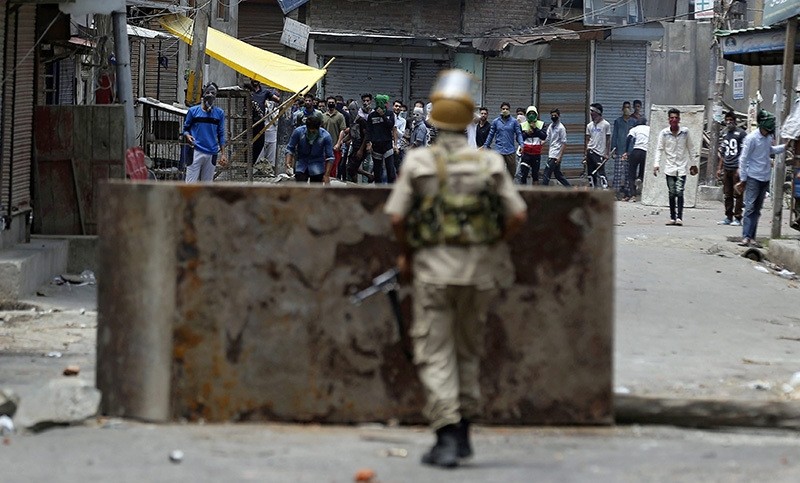 Kashmiri protesters prepare to throw stones at Indian police during clashes in Srinagar, the summer capital of Indian Kashmir, 10 July 2016. (EPA Photo)
by Compiled from Wire Services Jul 11, 2016 12:00 am

Indian authorities were struggling Monday to contain protests by Kashmiris angry after five people, including a teenage girl were killed in overnight clashes between protesters and government forces in Indian Kashmir after a popular rebel leader was shot dead, police said Monday, taking the toll to 23.

Around 300 more people, including 100 police officers, have been wounded in the demonstrations that broke out on Saturday despite a curfew imposed across much of the Kashmir Valley, where government forces have repeatedly opened fire on protesters in the worst civilian unrest since 2010. Most victims suffered gunshot wounds or teargas inhalation. There were also reports of injured protesters being targeted -- one local doctors' association said Sunday that tear gas canisters had been fired inside a hospital emergency room.

Another group, the Jammu and Kashmir Coalition for Civil Society, alleged that police had attacked ambulances taking the wounded to hospital.

Meanwhile police said protesters had set police stations on fire and thrown rocks at army camps in the south of the restive region. Among the dead was a police officer who drowned when angry protesters pushed an armored vehicle into a river on Sunday.

Paramilitary troops and police in riot gear patrolled villages and towns in the Himalayan region. Most shops were shuttered, businesses were closed and cellphone services were suspended. But by noon Monday, crowds were ignoring the clampdown to gather in parts of the main city of Srinagar and other towns.

The region erupted in protests on Saturday, a day after Indian troops killed Burhan Wani, the young leader of Kashmir's largest rebel group, Hizbul Mujahideen, which has been fighting since the 1990s against Indian rule and calling for independence. Wani, in his early 20s, had become the iconic face of Kashmir's militancy, using social media to rally supporters and reach out to other youths like him who had grown up amid hundreds of thousands of Indian armed forces deployed across the region.

At least 22 civilians and one policeman were killed in clashes Saturday and Sunday, as law enforcement officers used live ammunition, pellet guns and tear gas to try to break up the protests.

Most of those killed were young men under the age of 26 from southern Kashmir, police said. In addition, more than 150 civilians and 90 government troops have been injured. At least 10 of the injured civilians were in serious condition.

Anti-India sentiment is strong throughout the region of 12 million people, about 70 percent of whom are Muslim. Many resent the deployment of hundreds of thousands of Indian troops, and openly voice support for rebels who have been fighting since the 1990s to demand independence or a merger with neighboring Pakistan.

Both India and Pakistan claim all of Kashmir as their own, while each administers a part of the mountainous region. The two sides are divided by a heavily militarized Line of Control. Two of the three wars between the nuclear-armed rivals were fought over Kashmir, and India continues to accuse Pakistan of arming and training anti-India rebels — a charge Pakistan denies.

More than 68,000 people have been killed in the uprising and the subsequent Indian military crackdown.

A recent uptick in militant attacks has galvanized frustrated young Kashmiris, many of whom deeply resent the military's presence.

Wani joined the HM rebel group at the age of just 15 after his brother was allegedly tortured by government forces, and quickly became a rallying point for Kashmir's youth.

The state's former chief minister Omar Abdullah tweeted after his death that he had become the "new icon of Kashmir's disaffected".

Witnesses said tens of thousands attended his funeral on Saturday despite the curfew, chanting independence slogans and firing pistol shots in his honor.

Amid the protests, Indian officials indefinitely suspended an annual Hindu pilgrimage to a mountain cave that draws about half a million people each year. Authorities also postponed school and college examinations and suspended rail services.