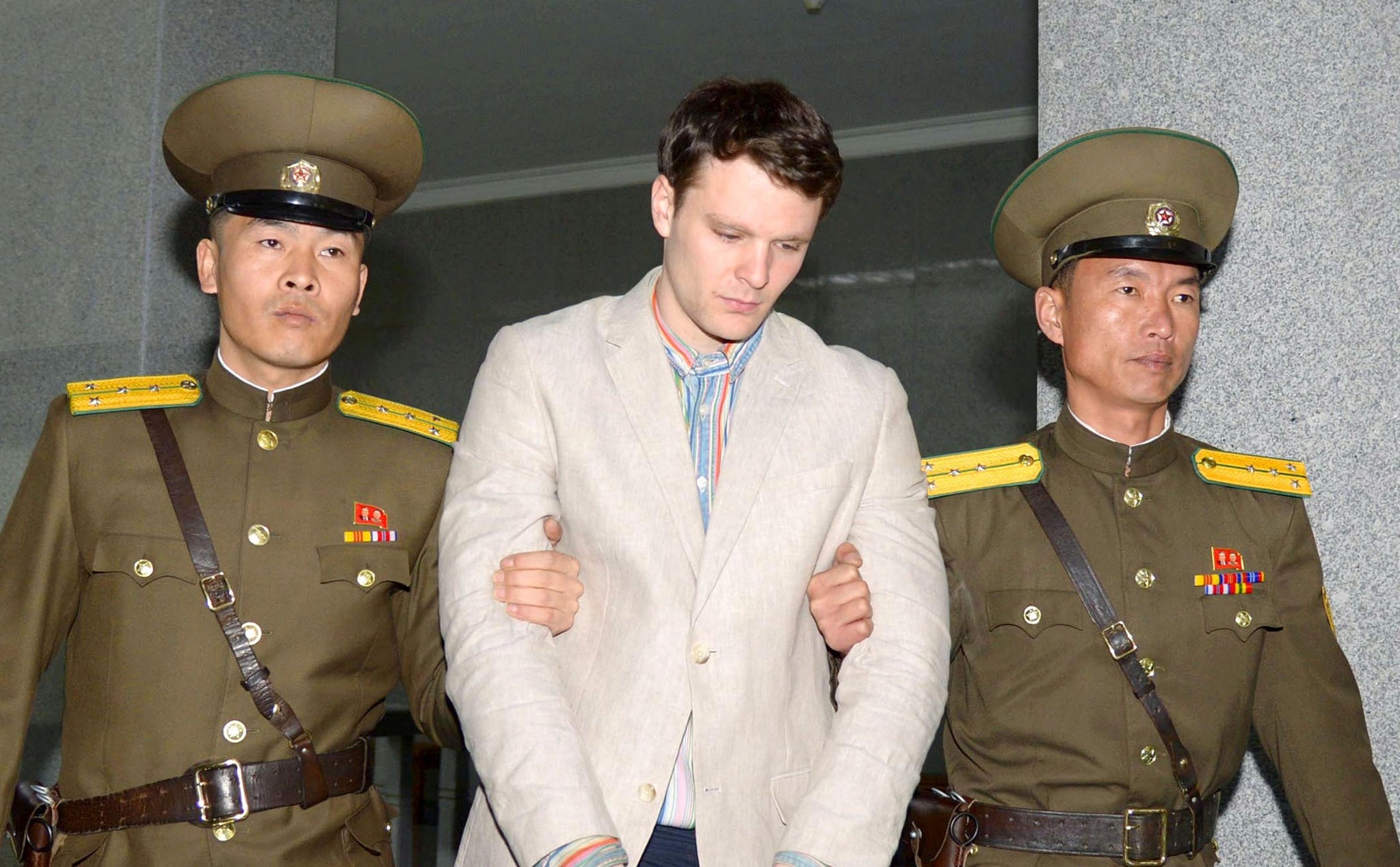 Otto Frederick Warmbier (C), a University of Virginia student who was detained in North Korea since early January, is taken to North Korea's top court in Pyongyang, North Korea, in this photo released by Kyodo March 16, 2016. (REUTERS Photo)
by reuters Jul 11, 2016 12:00 am

North Korea said on Monday it has told the United States it will sever the only channel of communication between them, at the United Nations in New York, after Washington blacklisted leader Kim Jong Un last week for human rights abuses.

All matters related to the United States, including the handling of U.S. citizens detained by Pyongyang, will be conducted under its "wartime law," the North's official KCNA news agency said.

The move was the latest escalation of tension with the isolated country, which earlier on Monday threatened a "physical response" after the United States and South Korea said they would deploy the THAAD missile defence system in South Korea.

"As the United States will not accept our demand for the immediate withdrawal of the sanctions measure, we will be taking corresponding actions in steps," KCNA said.

"As the first step, we have notified that the New York contact channel that has been the only existing channel of contact will be completely severed," it said.

"The Republic will handle all matters arising between us and the United States from now on under our wartime laws, and the matters of Americans detained are no exception to this."

North Korea has previously indicated that wartime laws would mean detainees will not be released on humanitarian grounds.

This could delay release of two detained Americans, giving North Korea one of its last bits of leverage in negotiations with the United States, said T. Kumar, Amnesty International USA's international advocacy director.

"The tension is at one of the highest levels now, and one of the areas they have control over is with the detainees," Kumar said. "They will use them as bargaining chips to get some advantages."

Kumar said he did not think the prisoners would be affected in other significant ways.

North Korea and the United States remain technically at war because the 1950-53 Korean War, in which Washington sided with the South, ended only with a truce.

The so-called New York channel, via North Korea's mission to the United Nations, has been an intermittent point of contact between North Korea and the United States, which do not have diplomatic relations.

It has been used in the past to exchange messages and, less frequently, to hold discussions, including over detainees held by North Korea. However, the release of U.S. detainees by North Korea has generally come only after visits to Pyongyang by high-profile U.S. leaders, including former Presidents Bill Clinton and Jimmy Carter and Director of National Intelligence James Clapper.

In 2011, North Korea used the New York channel to appeal for food aid and in 2012 to warn Washington about a planned satellite launch. The following year, a North Korean diplomat met with a U.S. official over a nuclear test.

The two Americans known to be detained in North Korea are Otto Warmbier, a University of Virginia student sentenced in March to 15 years of hard labour for trying to steal an item with a propaganda slogan, according to North Korean state media. The other, Korean-American Kim Dong Chul, is serving a 10-year sentence for espionage, state media said.

A University of Virginia spokesman said the university remains in touch with Warmbier's family.

Otto Warmbier's mother, Cynthia, declined to comment when reached by telephone on Monday.

Simon Park, senior minister at the Korean Central Presbyterian Church in Centreville, Virginia, who worked with Kim for several years, said he was concerned for Kim, and for his wife and their two children who are living in China.

"He is currently on a hard labour sentence and whether this will change or not, we are not sure," Park said, adding that he last spoke with Kim shortly before his imprisonment.

"All we can do is pray for his family," Park said.

North Korea said last week it was planning its toughest response to what it deemed a "declaration of war" by the United States after Washington sanctioned Kim.

On Saturday, the North test-fired a ballistic missile from a submarine, but it appeared to have failed after launch.

The announcement was the latest move by the allies against the North, which conducted its fourth nuclear test this year and launched a long-range rocket, resulting in tough new United Nations sanctions.

"There will be physical response measures from us as soon as the location and time that the invasionary tool for U.S. world supremacy, THAAD, will be brought into South Korea are confirmed," the North's military said early on Monday.

"It is the unwavering will of our army to deal a ruthless retaliatory strike and turn (the South) into a sea of fire and a pile of ashes the moment we have an order to carry it out," the military said in a statement carried by KCNA.

The North frequently threatens to attack the South and U.S. interests in Asia and the Pacific.

South Korean Defence Ministry spokesman Moon Sang-gyun warned the North not to take "rash and foolish action" or it would face "decisive and strong punishment from our military."

The move to deploy the THAAD system also drew a swift and sharp protest from China.

Chinese Foreign Minister Wang Yi said on Saturday that THAAD exceeded the Korean peninsula's security needs and suggested there was a "conspiracy behind this move."

South Korean President Park Geun-hye said on Monday the THAAD system was not intended to target any third country but was purely aimed at countering the threat from the North, in an apparent message to Beijing.

A South Korean Defence Ministry official said selection of a site for THAAD could come "within weeks," and the allies were working to have it operational by the end of 2017.

It will be used by U.S. Forces Korea "to protect alliance military forces," the South and the United States said on Friday. The United States maintains 28,500 troops in South Korea, a legacy of the 1950-53 Korean war.